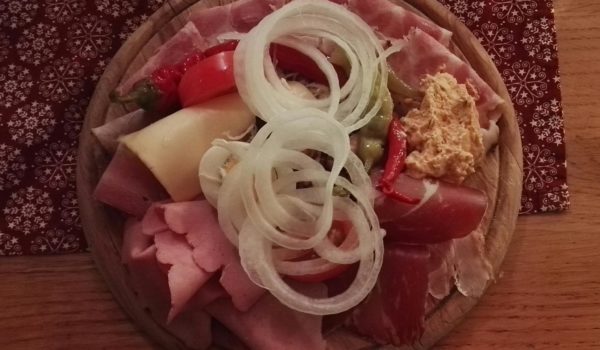 These days the main topic newspapers are writing about are the unusually heavy snowfalls all around Austria. Apparently, the entire country is sinking in snow, which is quite hard to believe looking at the gray, wet and snowless streets of Vienna. Having spent the last few days in Spain, naturally I wanted to experience the snow wonder. And have a nice little Brettljause at the same time, to give my stomach a well-deserved rest after all the tapas it was forced to process.

Obviously, Bad Vöslau was a wrong location for snow hunting, for it had almost as much as snow as the inside of my fridge. It had some mud, and a horrible wind, and it was only by pure chance that the wine-making village of Sooss just outside the town finally blessed me with a Brettljause.

I was not in a position to be picky, and the Jause of Eder did not particularly disappoint. In essence, it was one of those solid but uninspiring dishes, prepared with some skill but no inspiration, out of good, but highly predictable ingredients. It had two types of Speck, and a Geselchtes, and a slice of boring cheese, and a Liptauer, and something that might have been an Extrawurst but possibly a thinly-cut Leberkäse. It had some Grammel without Schmalz and a few slices of Schweinsbraten, buried deep under all the rest, and thus not visible on the photo. The Schweinsbraten was the best part of the Brettljause, and if I were to visit Eder’s again, I would consider taking the Schweinsbraten alone. It was totally worth the extra score point over the average. Oh, and the fact that a half of a hard-boiled egg was provided.

Sooss does not lack Heurige, and three of them open today were the proud bearers of the Top Heuriger title. None of them had a Brettljause on the menu, however, though all had cold buffets, of course. This is just to warn you to use the Top Heuriger site with care and check the taverns’ menus online before assuming that they have Brettljausen.