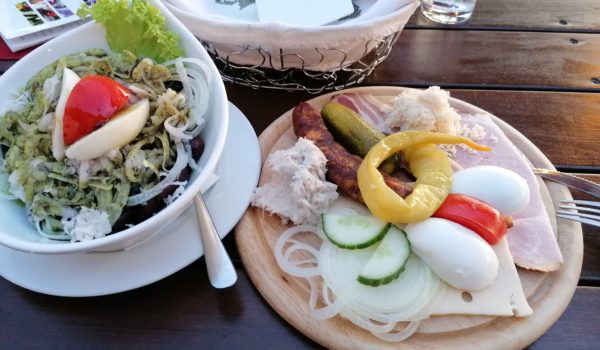 The southern Styria is often called “Austrian Toscana” for its gentle hills, endless vineyards and agreeable weather. Being no expert in Toscana, I call it a place to rent a bike, get very pissed and then cycle down a hill at a break-a-neck speed. But it’s a very beautiful area at any rate. If I had to break my neck somewhere, it would be in the southern Styria.

My second Brettljause of today was actually a “Bauernjause,” meaning that the ingredients were scarce and thickly cut. In the past, peasants did not have much food and neither time nor machinery to cut it finely, you see.

Cheese, ham, Speck, Schmalz, Hauswurst – this kind of summarizes everything you need to know about the Nekrep’s creation. None of the above amazed me with its taste, but the overall experience was more than pleasant. Perhaps it was the beautiful view over the vineyards as the sun was setting down or the serene atmosphere of the winery, but I felt genuinely happy. They could have served me rat liver, and I would have liked it. Well, maybe not.

As the case is with many wine places around the southern Styrian wine road, eating at Nekrep would have been a totally different experience had it been located somewhere else, like in the middle of Vienna’s 15th district. But in terms of the atmosphere, especially in late autumn, the southern Styria is simply unbeatable.

As an added value, the waiter at Nekrep misheard my badly-accented order of Sauvignon as “soda” and promptly delivered a glass of sparkling mineral water to my table. Which was actually the drink I had really been craving for but forgot to mention. Brilliant.