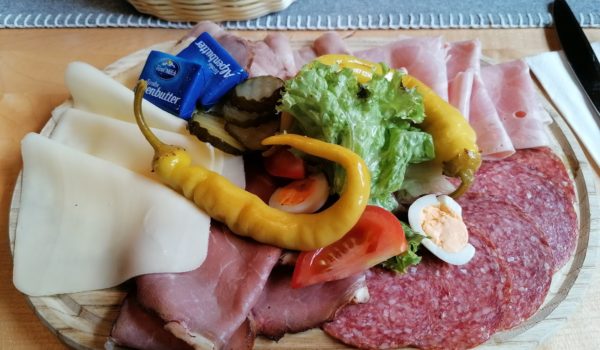 It is a known and comforting fact that the same supermarket sells slightly different stuff in different regions of Austria. Perhaps this is because of a noble desire to support local producers. Or, possibly, it’s because of the purely business reason of cheaper transportation. Whatever the intention was, some products, like Speck and cheese, are much better in the supermarkets of, say, Tyrol and Styria than in Vienna or Lower Austria.

The motive of saying this is because some of the restaurants in the alpine region do their shopping at supermarkets as well, and consequently manage rather good Brettljausen without spending a minute raising a pig or milking a cow.

The collection of thinly-cut sausages and cheeses at the Finkau is a good example. In Vienna, a Brettljause prepared with such a lack of effort would have been passable at best. Here, in a nice hotel/restaurant at the beginning of the Wild Gerlos valley, it actually tastes good. Mainly, it’s thanks to the Speck and the Schweinsbraten, which both have a distinct “regional” taste. The same cannot be said about the Krakauer and the salami, which, while good, tasted exactly as one would expect from an over-the-counter supermarket product. The two cheeses were hardly more exciting: one was close taste-wise to a Dachsteiner, the other was some sort of a Bergkäse (mountain cheese). They had some taste, but I would not describe it as strong, since I can almost see these cheeses on a supermarket’s shelf, wrapped in an industrial plastic packaging.

Despite everything, it is hard not to recommend the Finkau. First, it looks really nice inside and outside and the waiters are very friendly. Second, the surroundings (especially the nearby green lake) are quite spectacular. Finally, if you decide to hike in the Wildgerlostal, there is no real alternative: one hut higher up looks interesting but very basic, and the hut at the end of the valley requires two hours of steep climbing, so there is no practical way it can serve anything good.