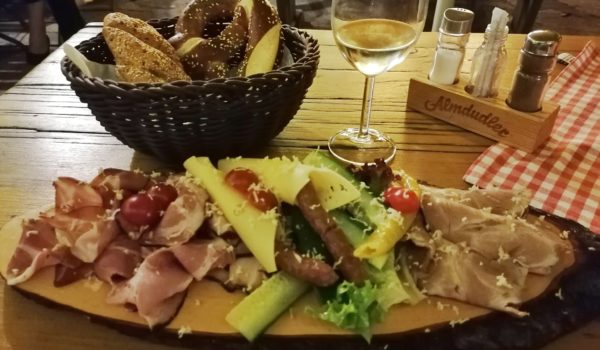 The last time I was in Brandl, it was spring, and the answer to my question “may I have a Brettljause?” was an unusual “not yet.” The Jause at this restaurant at the far point in Grinzing where the number of locals finally starts to exceed the number of tourists is a seasonal affair. To try it, you should wait until summer, though, honestly, the result is not worth the wait.

For 12 euros (without bread), you get slices of two types of Speck, some Schweinsbraten, two small Kaminwurzerl sausages (as produced by Handl and available from any supermarket) and two slices of unexciting cheese. To be fair, one type of Speck was quite good, while the other might have also been good at some point in the distant past. The Schweinsbraten had a strong “natural” taste (read: pig), which is generally not a bad sign, but suffered from the total lack of salt.

The vegetable part of the Jause consisted of a few leaves of green salad, a couple of cocktail tomatoes, a few slices of a fresh cucumber and the horseradish cut into such fine pieces that there was no taste left in them.

At least, this Heuriger did not have annoying musicians, but the same can be said about your home, where the identical Brettljause can be prepared at a fraction of the cost. Besides, the table I was sitting at must have been close to some hard-to-see sewage hole, because occasionally the smell was awfully unpleasant.

As a stop for a quick glass of wine (which is quite good there), Brandl is a reasonably decent place, but there are plenty of better ways of spending your hard-earned money than on its Brettljause.