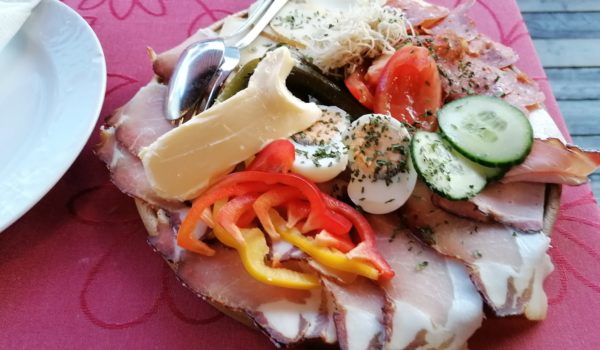 I knew I had to visit Café Pirnbacher the moment I saw its illuminated terrace on my first evening in Bad Hofgastein. It is located just above the town, requiring a 15-minute uphill walk, and the view from it on the town’s center and the surrounding mountains is fantastic. Having reached it and taken a seat, I was, highly unusually, praying that the restaurant’s menu would not feature a Brettljause. After two Brettljausen earlier on the same day, a nice mixed salad was all I was ready to accept.

The menu did not feature a Brettljause. Instead, it listed something called a “mixed plate of cold cuts,” which is, let’s admit, exactly the same thing. The salads, while present, looked quite heavy (one had baked chicken in it) and not particularly interesting, but I was about to order one anyway when the waiter arrived and my mouth said “Kalte Platte” in a vibrant manifestation of a disconnect between the brain and the vocal chords. All my experience and common sense should have convinced me that three Brettljausen a day was a suicide.

The cold cuts arrived and looked damn good. A full egg and a huge portion of fresh butter dominated the board, but the cheese, Speck, some pinkish Chorizo-like sausage and a few slices of Geselchtes appeared more than a little tempting.

Thus, I started slowly and strategically, leaving the filling cheese till the end, trying not to overdo with bread and making sure I cut as much fat off the Speck as possible. To my own surprise, the plate gradually grew emptier, and I was not disgusted at all. I was quite happy in fact. The sausage was the absolute highpoint: tasting unlike anything I’ve tried before, it had a peculiar flavor reminding one of alpine pastures, grazing cows and – excuse me – cows’ dung. I would love to know what went inside that sausage.

I am not going to eat three Brettljausen in nine hours ever again, and I don’t advise anyone try the same, but if you really have to (for example, if someone promised to give you a lot of money if you do), eat the final one at Pirnbacher. Chances are, it will be the best Jause of the three.