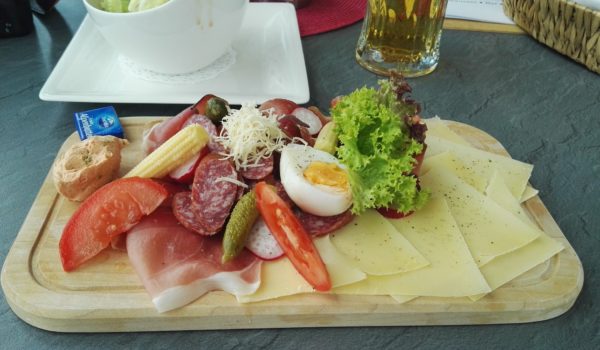 Today I ate the 400th unique Brettljause since I had started to keep a record of that kind of stuff (“unique” because occasionally I revisit places and order the same Jause again, and that does not count). So what location is more appropriate to celebrate such an occasion than a restaurant high above my current holiday’s location (the village of Kals), overlooking the Grossglockner, the highest peak of Austria?

Well, to tell you the truth, I could not really see the Grossglockner today, because its summit was hidden behind a thick cloud, but nevertheless the view from the Adler Lounge was damn impressive. Sharing the building with the upper station of the cable car, the Lounge includes a bar, a spacious restaurant, a large terrace and even a small hotel with three apartments. Best of all, though looking quite ugly on the outside, the restaurant appears refreshingly modern inside, giving plenty of confidence that the food will not be of the typical “two week old goulash” type.

The “Jausenbrettl” was indeed not your typical Tyrolean Brettljause, if only in one thing: the ingredients were thinly cut. Now, I love my Speck and cheese to be thickly cut as that adds to the experience, but one has to admit that no matter how sharp the knife they give you, you will never be able to cut the Speck as thinly as the machine. And thinly cut Speck, when it’s quality Speck, does taste better.

Today I learned that thinly-cut mountain cheese tastes better as well, especially when the bread is so fresh and has such a deliciously crunchy crust. On the other hand, cutting the Hauswurst into slices is a total waste of time, since it is best when you can choose how much of it you wish to bite off.

The only other ingredient present (and the fact that there was another ingredient is already quite an achievement for Tyrol) was a Liptauer spread, which could prove just one more time that there is indeed something in a Brettljause that Lower Austria and even Vienna know how to do better. You guessed it, it’s the Liptauer.

So was the Adler Lounge the right place to celebrate the big 400th? Well, who cares, it’s just a number, and the 401st Brettljause will more likely than not follow tomorrow. The fact is, if you are in Kals for more than two days (and if you come for two days or less than you are an idiot), the Adler Lounge is a must-visit location.