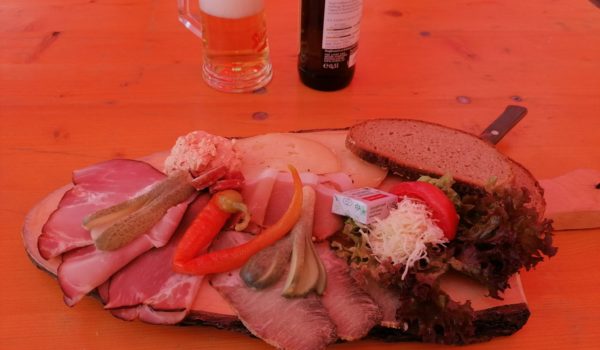 Generally I do not hold high expectations of the restaurants situated right by the cable cars’ upper stations. At best, the food there will be reasonably fresh, because of the relative simplicity of delivering the raw ingredients. Today, however, having walked around the Schlossalm for a couple of hours with no breakfast beforehand, I decided to give the Kleine Scharte (which is the name of the restaurant) a chance. After all, I reasoned, the earlier I eat my first Brettljause, the easier it will be for me to complete a second one later on. (In retrospective, I was wrong.)

For whatever reason, the restaurant was operating as self-service today. Upon placing an order, I was handed the drink (no draft beer, unfortunately, only bottles out of a fridge) and a hefty wooden sign with a table number, the idea being that when the main dish is ready, the waiter would bring it to the table on which I place that number. In practice, this was all rather pointless, as my Brettljause arrived something like a minute later. Obviously, the cook was making Brettljausen according to some well-defined and often practiced procedures.

Not that making a Jause like Kleine Scharte’s required a lot of effort. It was one of those “textbook” products that leave hardly any place for creativity: take a board, add slices of Speck, Geselchtes, Schweinsbraten and cheese, drop a ball of Liptauer, a few small slices of Kaminwurzerln, tea butter (don’t even bother unwrapping it), horseradish, cucumber. Fertig.

Yet all that manufacturing perfection was destroyed at once by a tiny detail: the board also contained a sharp knife, like the one they give you at the most rustic Tyrolean huts as the only piece of cutlery. In this case, the knife was totally pointless because a) there were plenty on knives and forks on the table anyway and b) all the ingredients were already thinly cut.

As far as the taste went, absolutely nothing in the Brettljause had any “wow” factor. Not even a “well, that’s better than expected” factor. You eat it and feel heaviness, as if a large amount of food has just completed its journey from the outside to the inside of your stomach. Which it, in fact, has.