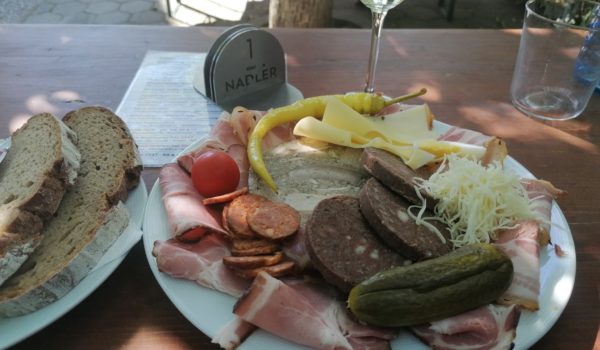 The entire humankind can be roughly divided into two groups: those for whom a Brettljause is an indispensable element of hiking, and those who think that Brettljausen are something to chew on while drinking wine at a Heuriger. (Okay, there is probably a third insignificant cluster of a few billion people who have never heard of a Brettljause, but they are irrelevant for this discussion.). Personally, I belong to the former group, although I consider “hiking” not as a healthy sports activity but rather as a means of reaching a Brettljause while, hopefully, looking at a nice scenery along the way.

The problem of Arbesthal, the village where Heuriger Nadler is located, is that there is very little pleasure to be obtained hiking around it. It’s all roads, fields, and a forest belonging to some millionaire. For that reason, I’ve decided to try something different: to cycle, more than 70 kilometers in both directions. Looking back, I am not sure I would repeat the journey: going there was easy but boring because of a very straight and featureless cycling path, and the return was quite annoying because of a need to cycle along busy roads and through dull industrial areas.

But I’ve reached the Heuriger reasonably tired and hungry, and that’s all that mattered at the end. The hunger helped because the first thing I noticed about the Brettljause was that at least a half of it was black sausage and head cheese, two of my least preferred ingredients following liver. They were more edible that I feared, though, some parts of the head cheese (those with almost no jelly) even tasty, by head cheese standards.

With these two enemies beaten, the rest of the Brettljause was very pleasant. The Geselchtes and the Kümmelbraten were top-class, even though removing the cartilage from the Braten is not something I generally enjoy. The cheese was, frankly, redundant, but the small slices of paprika-spiced sausage were really good.

It was not an extraordinary, yet a better-than-average Brettljause, but what made my cycling to Arbesthal worth it was ultimately the wine. The red wines of Nadler are fantastic – some of the best I’ve tried for quite a while. So good, that I even bought a bottle and cycled all the way back to Vienna with it, just to accidentally drop and break it in front of my apartment’s door.