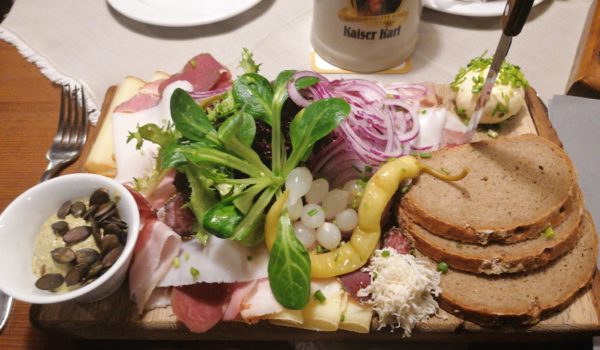 In the last few years the wonder of high-speed train connections has turned Salzburg into a sensible destination for a day trip, and its Brettljausen, once unthinkable without full-fledged holidays, have suddenly become as accessible as those in Grinzing. Well, almost.

The truth, however, is that Salzburg is an extremely touristic city, and most of the restaurants in its historical center target Schnitzel-hungry tourists rather than Brettljause aficionados. That is why it was very pleasing to find Zwettler’s Jause both tasty and quite authentic, despite being mostly surrounded by the kind of people who first insist on ordering something very traditional, but when faced with a stuffed calf’s stomach, settle for good old chicken nuggets.

At a first look, the dish looked almost vegetarian, so covered with green stuff it was. However, underneath the generous piles of onions, salad and horseradish, there were more than enough slices of different types of Speck, Geselchtes and cheese, and a few bits of a thin pepper sausage, too. While the meats had rather distinct and non-industrial taste, the cheese was more generic and supermarket-y, but at least it possessed a bit of flavor. I quite enjoyed the pumpkin spread, as a better alternative to a Liptauer, although it was so liquid that it constantly threatened to drip off the bread.

Considering the size of the Jause – even the size of the ball of butter that came with it – the supplied three slices of bread were criminally insufficient. Fortunately, ordering a few more was not a big deal.

No doubt, the outskirts of Salzburg, not to mention the surrounding mountains, are likely to offer much more enjoyable Brettljausen, but if you are in a hurry or dying for cultural attractions before getting into pork and beer, the Zwettler’s option is absolutely fine.