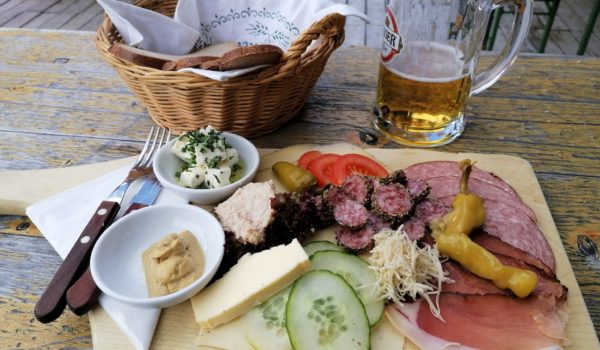 Austrian tourism business is waking up after the coronavirus crisis, but is doing it slowly and carefully. The skiing/hiking village I am staying in looks deserted as if after a zombie invasion (once zombies leave). My hotel is well-occupied, but it seems to be the only one open. The windows of all the other hotels and guesthouses are spookily dark. Besides, there is a lot of repair and construction going on, as if the break between the early end of the winter season and the late start of the summer one was pointlessly spent in home isolation (and it probably was).

The first day of my short holidays coincided with the opening of the Gabühelhütte, conveniently located close to the top station of the Hochmaisbahn cable car. Approaching it, I was not too optimistic about finding a Brettljause. After all, my last two weekend hikes ended Jause-less, despite the various restaurants’ online menus promising it. It looks like in the aftermath of COVID-19, the good old cold cuts have become unprofitable. In the case of the Gabühelhütte, too, I was ready to turn back when I noticed a mysterious “Gem. Jause” scribbled on a blackboard outside the entrance. Which could only mean a “mixed snack.”

It was a Brettljause. Not a particularly big, varied or beautiful one, but a Brettljause nevertheless, featuring a few slices of Speck and “Wiener” sausage, two types of sliced cheese, a salami with a black pepper crust, some Verhackertes and goat cheese in oil. The goat cheese was homemade, as I could learn from the owner’s conversation with another customer. The rest, apart from the really good Verhackertes, looked and tasted quite industrial. The pepper-salami was particularly out of place, since the pepper made its taste so strong that it killed all the other ingredients and simply forced me to order more and more beer. The goat cheese did not impress me either. It did not have much taste by itself, and the oil it was swimming in was quite bitter.

Looking back, I would not call that Brettljause a celebration of the tourist season’s reopening. Perhaps the early closure of the ski slopes really hit the local businesses hard, resulting is smaller portions, higher prices and more supermarket stuff. Yet this being a first Brettljause of the first post-COVID holiday, I would lie if I said I did not enjoy it.