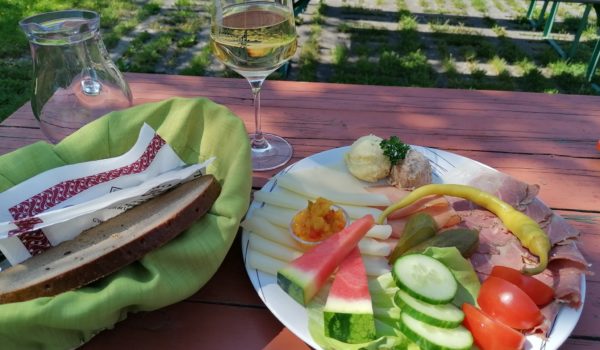 All the waiters are wearing transparent face shields, and there is a hand disinfectant at the entrance as well as an infographic explaining exactly how one should behave two days after the reopening of restaurants in Austria. The visitors obey impeccably; I’ve witnessed a group of seven Austrians who reserved a long table in advance and made sure that they sat at the opposite ends of it in groups of four and three with at least a meter between them (four currently being the officially allowed maximum of people sitting together). I have already had a chance to visit a couple of beer places in Vienna, and I must say that the adherence to the rules there was nowhere close to this small Heuriger hidden in a remote area of the Mostviertel. It is easy to understand how Austria has managed to keep the number of infections low (except in Vienna, of course).

It was not a coincidence that Lettner was the first Heuriger I went to after the relaxation of the restrictions. Seven years ago it served me one of the best and cheapest Brettljausen in Lower Austria, and I have long planned to revisit it to try a few other snacks from the menu. Unsurprisingly, the prices have gone up somewhat, but the dishes remain quite cheap, so even when I chose the most expensive “Specialties of Mostviertel” plate, it cost me only seven and a half Euros.

Unfortunately, the Jause I received was extremely underwhelming, if not plain disappointing. After the very varied and authentic Brettljause that I had remembered Lettner for, the Schmankerlteller looked awfully basic. Thinly cut cheese, Speck and Surbraten shared the plate (a normal plate, not a wooden plank) with Verhackertes and a bit of potato spread, which truly is a specialty of Mostviertel, despite being nothing more than cold mashed potatoes. The Verhackertes was excellent; the Surbraten was good, while the rest was just a filler. The only unusual touch was the presence of two watermelon slices, which, while not adding anything to the authenticity, went very well with the salty meat.

It is not the first time I burn myself when ordering the most expensive stuff on the menu, but that does not make the disappointment less painful. At least the bread with Geselchtes that I ordered afterwards was up to the high standard that I had remembered that Heuriger for. On the other hand, being able to enjoy a Brettljause outside and not having to wash the plate myself later on is an amazing feeling after more than two months of confinement.