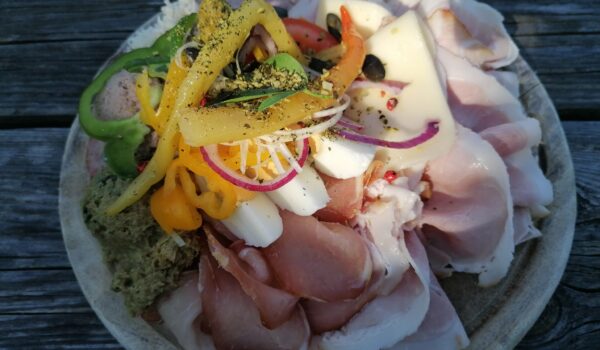 I fear bringing the wrath of the proud citizens of Hartberg upon me, but I am going to say it anyway: Hartberg is a sweet little town that must be really boring. I can also say it’s a little boring town that is actually quite sweet, if that makes you feel better. But my point is the same: Hartberg has a pretty town center, vineyards, a forest-covered hill with a tower on it, and an industrial area. Once you have visited all of the above (the industrial area is totally optional) – which takes, like, half a day – there is not much else to do except going back to the railway station and taking the two-hour journey back to Vienna. However, since you are not very likely to come back soon, it is worth making a stopover at one of a Heurige on the hill’s slope.

I ended up at Weinhof Postl, which attracted me straight away with its nice view over the town and the vineyards (unfortunately, the industrial area was also quite prominent). Nearly all the tables were empty but had “reserved” signs on them, so I ended up sitting in the corner of the farthest table. It provided me with a nice panoramic view but at the same time made me almost invisible to the waiters. And that is how I ended up in the situation that is quite rare in a Heuriger: with a lot of food but not enough wine. With the first quarter gone rather fast just to quench my post-hiking thirst, I was left with a glass of water, an impressively looking Brettljause and almost no chance of placing another order.

While geographically in Styria, Hartberg is less than 10 km away from Burgenland, and the Burgenland’s influence is noticeable in the not-so-strong taste of the ingredients, cheese and spreads especially. In the case of the liver spread that was actually a blessing, but the Liptauer and the typically Styrian green pumpkin spread would have benefitted from a bit of extra flavor. On the other hand, the Jause was sprinkled with different spices, which occasionally resulted in unexpected taste and made the eating more exciting. The meats, of which I counted four types, were all good quality, and a few of them had the dry, slightly tough texture that I normally like a lot.

I like it a lot when accompanied by plenty of wine, though, and getting more wine was turning into an impossible task. More and more people arrived, and soon the entire garden was full of partying families, the waiters getting totally overwhelmed with the stress and ignoring all my desperate attempts to attract their attention. At one point I simply gave up, and allowing my stomach a few minutes break to process what it has already received (it was a big Brettljause), I finished the remaining bits with a lot of effort and not much pleasure.

As a result, I can’t help feeling that I didn’t enjoy the Brettljause of the Postl as much as I should have. Therefore, if you decide to visit Hartberg, I suggest you book a table at this Heuriger well in advance and come with a large group, to make yourself difficult to ignore. The chances you will want to return to Hartberg soon afterwards are slim, so make sure you get the most out of your stay.