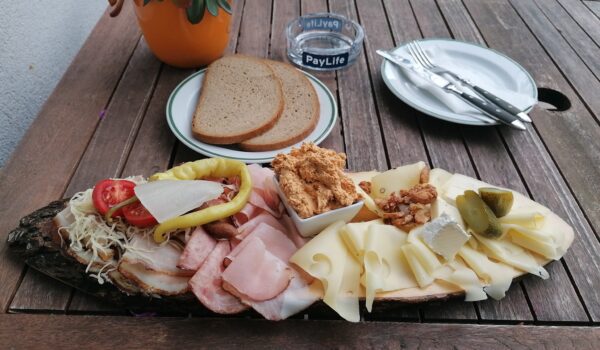 Today was supposed to be the day of the annual Viennese wine-hike, which unfortunately got cancelled at the last minute over the COVID-19 fears. Still, the streets of Grinzing were busier than usual with people, mostly young and English-speaking, who improvised by going on a sort of a hike anyway, carrying with them their own wine bottles and beer cans. With the number of people hanging around, I was actually slightly concerned about not being able to find a place at the Wiegel, a previously unknown to me Brettljause place in Grinzing, which I had discovered by chance a few weeks ago.

As it turned out, I arrived too early, for this Heuriger, located a bit away from the main tourist area, opened only at 15:00. When I entered it at 15:05, only one other table was occupied, although afterwards the garden started to fill up fairly quickly.

Nobody I saw took a Brettljause, and I must say that was pretty stupid on their behalf. The “mixed cold plate” was much better than I had expected. To notice different types of cheeses (four, to be exact) was especially gratifying, and although all them had more-or-less the same taste of nothing, the cook’s diligence was commendable. The Liptauer, unusually thick and dark-colored, was among the best I’ve ever tasted – so much better than the pinkish watery crap most of the Heurige in Grinzing serve. I quite liked the meat part, too, particularly the cold Kümmelbraten with strong horseradish, which I would not mind taking as a separate dish if the fate brings me to this Heuriger again. If I had to complain, it would only be about the cheese-filled salami, which tasted greasy and somehow very cheap.

I don’t know if it’s the Coronavirus to thank for that, but recently I have been rediscovering Grinzing as actually not a bad place for having wine and snacks. Heuriger Wiegel is just another case in point.