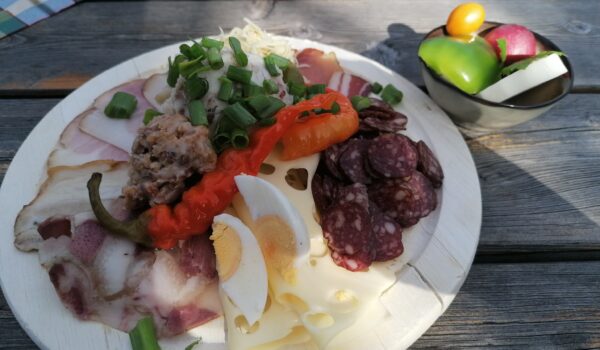 Going to the Southern Styria in October is one of the few traditions that I follow. From the first time I visited this “Austrian Toscana,” it became quite clear that there is no better place to combine healthy activities like hiking and cycling with the undertakings much less healthy but not less enjoyable, such as drinking wine and eating Brettljausen. It is also a perfect excuse to rent an e-bike, for the hills of this part of Styria are not easily conquerable without a slight electrical help.

The Sourthern Styria has two other huge advantages over my other favorite destinations: it is relatively quickly reachable, and it has more Heurige that one can visit in the entire life. Especially in October, which is the time Styrians drink the Sturm, there is a place to stop and have a drink almost every 100 meters. Not every place serves a Brettljause, of course, but finding one you have not tried before is never a big deal.

Polz is a bit hidden in the sense that one has to take a turn and go for a while in the direction opposite to the one most visitors of the famous wine street would follow. Polz being one of the best known wine makers of the region, it comes to no surprise that the Heuriger is very nice. While most of the restaurants occupy hilltops to provide panoramic views, Polz is actually situated at the foot of a hill, so sitting in the garden allows you to enjoy the sight of the vineyards growing up the slope. And of course I would not be wring these words if Polz did not have a Brettljause. As I had almost expected, it was a rather good one.

Bad things first: the slice of headcheese looked creepy and tasted the same. At least there was only one slice of it. Not understandably, the cold Schweinsbraten was also featured as a single slice, and with a bit of annoying cartilage inside. And last, don’t go to Polz if you have something against Grammelschmalz and Verhackertes. I don’t, so the vast amounts in which these two ingredients were represented did not bother me a bit, particularly considering their superb quality, If pig fat is not your thing, however, beware.

The next best thing was the dry ham – lightly salted and a perfect companion to wine. The herb-spiced Speck (also featured as a single slice for some reason) had quite an original and pleasant taste, but unfortunately I made the blunder of stuffing it in my mouth together with the skin, which proved to be unchewable. Good that I still had some wine to help me swallow the whole mess because the alternatives would have been embarrassing.

As far as Styrian Brettljausen go, the one of Polz was on the average side, but still much better than what one finds in Vienna and its surroundings. Besides, being back on the wine street is always a great feeling. New COVID-19 cases are some of the Austria’s lowest here, so maybe wine and Schmalz provide some undiscovered immunity boosts too.