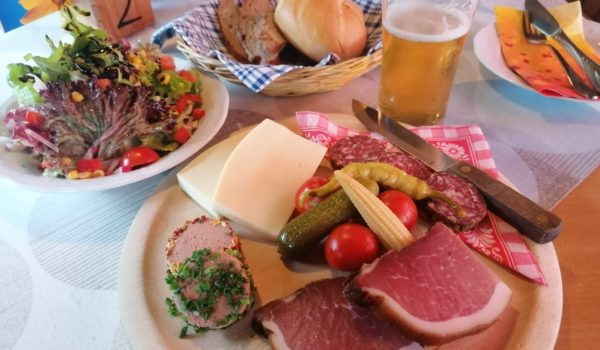 After a year away from East Tyrol, I almost forgot how the East Tyrolean Jausen looked like. In short, they look like South Tyrolean Marenden (Cheese, Speck and some salty sausage, such as a Salami) but usually with some additional ingredient. In this case, the “extra” was a Leberwurst, or a liver pâté – something I can usually happily live without.

I did not mind the one of Gribelehof, however. Partly this was because at that moment I would not have minded anything that could ensure a roof above my head. My first day of holidays has “fallen into water,” as Austrians would say, and the amount of the rain falling from the skies was such that to experience any more water I would have had to jump into a sea. I was ready to eat anything to stay indoors, and finding a Brettljause in addition to a shelter was pure luck.

But as far as liver pâtés go, this was not a bad one. There were two slices of it, and the one with a herb crust did not even taste of liver much, so it provided a nice distraction from the heaviness of the other ingredients, which came as huge thick slices and required quite a long time to finish. Again, I was quite grateful for that, since eating a lot, though unhealthy, always beats getting soaked.

According to the menu, the meat came from the restaurant’s own farm, while the cheese did not, and that was noticeable. While the Speck, the salami and even the liver sausage had rather original flavors (I really liked the Speck’s peppery crust, for example), the cheese was an obvious afterthought and boring as hell. In the South Tyrol, cheese normally has more taste, while this East-Tyrolean one came straight out of a supermarket.

Still, I can’t complain much about this Brettljause. Not only did it save me from the rain, it was also heavy enough to make me skip the dinner. I am glad, however, that I took a mixed salad to accompany the Jause; large, fresh and varied, it made the eating much more exciting.