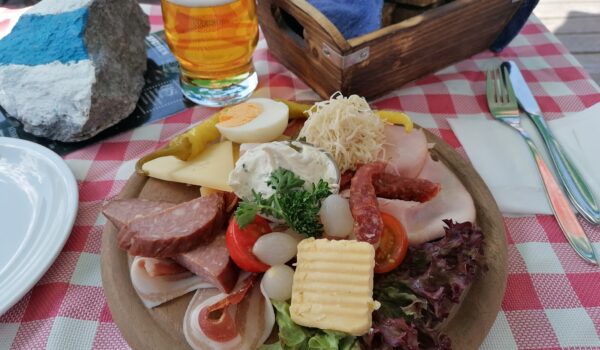 The good thing about the skiing area of Montafon is that the mountains are not yet completely fucked up by ski lifts, like in many other places in Austria. The lifts are there, of course, but there is still some nature left, and it’s quite possible to make a decent picture of a mountain lake without having to remove all the traces of cable cars in Photoshop afterwards.

The Grasjoch hut is located between two ski lifts and the views from it, though nice enough, are not spectacular. It’s a self-service restaurant, but that fact did not bother much, as the window where one orders and takes the dishes was just a few meters away from the tables, and the preparation was extremely fast. My Brettljause was ready in three minutes, which was impressive even considering the simplicity of the outcome.

All in all, it was a pretty standard Jause, prepared exclusively out of the ingredients available in any supermarket. Frankly, it didn’t require any talent to make something like it. It was acceptable, considering the location, but somehow I hoped for more. Even the cheese was not strong: highly disappointing for Vorarlberg.

The bread, too, left a lot to be desired – not fresh at all, so I used it only to finish off the boring herb spread. And some slices of bread had dry berries in them. I hope that this was merely a mistake on behalf of whoever bought the bread, for serving such a bread with a Brettljause intentionally should be considered a crime.