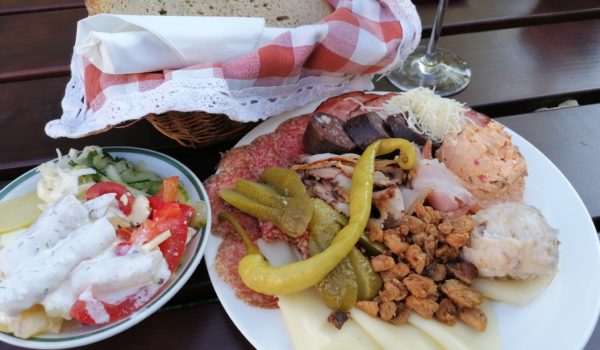 The taverns of the wine village of Gumpoldskirchen near Vienna are lovely. The main street itself is quite beautiful (though short), but walk into any of the open Heurige (and there are always a few open), and you will find yourself in an oasis of greenery and calmness. It is even calmer than usual these days, as the coronavirus has managed to scare off both tourists and locals alike. Which is absolutely fine, as far as I am concerned.

The Fassbinderhof is one of these Heurige, and I do not remember having ever been there before. That by itself is quite strange, considering that its online menu clearly mentions a “Heurigerplatte,” which is just another word for a Brettljause for me. Shortly back from a visit to Tirol, I found the sight of this typically Heuriger-ish Jause in all its thinly-cut splendor almost a relief. It looked quite light and very varied. I counted at least eight ingredients, but each recount seemed to give me a different number, which may have something to do with the Viertel that I had drunk straight away upon the arrival.

The ingredients were a mixed bunch. The cheese was instantly forgettable; the black pudding appeared to contain too much flour and thus had neither a pleasant texture nor taste. The Schweinsbraten were fantastic, on the other hand, dry and sufficiently “aged” to go perfectly with the horseradish and pickles. I wish the cook would have also taken the effort of removing the bits of cartilage from the Braten, especially since they mostly fell off the meat by themselves anyway.

What distinguished this Heurigerplatte from many others was, however, the Grammelschmalz – or, rather, the Grammel and the Schmalz. Normally, this mixture of creamy pig’s fat with crunchy bits of baked fat is served as a single spread. I suspect that the people who would normally find pure pig’s fat too disgusting accept it easier when it is mixed with the same fat in a slightly different form. Don’t ask me what the logic of this is, but the taste is indeed better.

Now I know that the combination is even tastier if I am allowed to control the ratio of Schmatz and Grammel myself. It is such a simple idea that I wonder why no other Heuriger has come up with it. I would recommend the Fassbinderhof in general, but its Brettljause deserves an additional point for creativity.