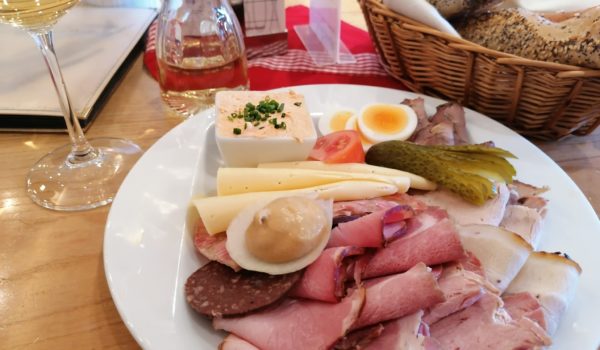 According to its website, this Heuriger opens at 3 o’clock. As I was approaching it at a quarter to three, the number of cars parked along the street made me worried. Some huge celebration – a wedding, probably, was taking place on the first floor, as evidenced by long set tables and bored kids’ faces visible through the ceiling-high windows. As I entered, I noticed that most of the tables were already occupied, and those that were not all had “reserved” signs on them. An open door led to a long and dark cellar-styled hall, which was being prepared for some other event by at least five members of staff, all wearing the company-branded shirts. The place definitely looked impressive and hugely popular. Weinstimmig is not your typical Heuriger, it’s a serious institution, despite being located in a far-from-anything-of-interest village that most people would rightfully ignore.

Fortunately, it turned out that a small table was available, and within a couple of minutes I had a glass of wine in front of me and was awaiting the Heuriger’s special “Gewölbeplatte,” happy that my two-and-a-half-hour walk along boring asphalt roads was not for nothing, after all.

The Brettljause arrived just a few minutes later, and, to be honest, did not create a great first impression. First, it was on a normal plate instead of a board, and second, the ingredients looked piled up on top of each other rather than arranged in any remotely aesthetic fashion. I possess enough common sense, of course, to understand that once I eat the ingredients, they will look even more mixed up and unaesthetic in my stomach, so I remained undeterred and was rewarded with one of the better Jausen of the recent times.

The variety was the strongest point: although there was only one type of cheese (the menu had a cheese plate as a separate entry), and that cheese was quite rudimentary, I counted at least seven types of meat. The dish also contained a small bowl of an excellent garlic-spiced spread. The quality of the meats was great, too: they tasted fresh and not at all industrial. My only problem was that some slices still had hard-to-chew skins on them. Perhaps the cook thought that would add to the authenticity, but in practice the skin did nothing but annoy me.

Despite this irritation, Weinstimmig is totally worth a visit, even if it requires a somewhat lengthy walk from the nearest railway station at Zellerndorf. Do not try to walk there from Retz like I did, however – that would be too lengthy.