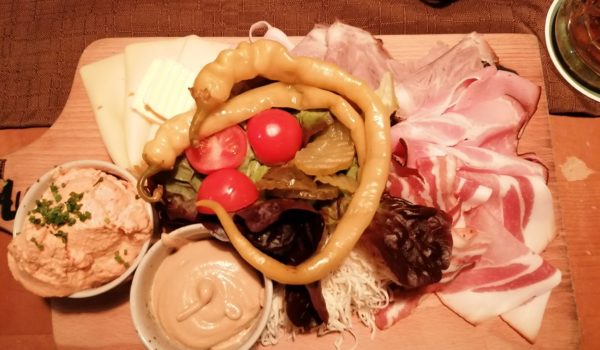 Most people know Attnang-Puchheim as the railway station where one changes from the train from Vienna to the train going towards Hallstatt, Austria’s most famous tourist-infested village. Unfortunately – as I realized far too late – this notable fact does not mean that Attnang-Puchheim is a good place for hiking. In fact, walking from hill to hill seeing nothing but lonely farms, sad-looking hamlets and overhead power lines is uninteresting bordering with depressing. Alas, having arrived at 11 a.m., I had exactly five hours to waste, for Zum Alfons, my Brettljause destination, would not open until four o’clock.

When I actually got into restaurant, I was positively surprised. Not only did it look nice and well-maintained on the outside, it was actually cozy and stylish inside, if one would disregard the owners’ unhealthy obsession with dwarves (there are literally hundreds of the dwarf dolls all around the place, mostly identical). Moreover, I felt lucky to arrive punctually for the opening, since half an hour later the restaurant was packed with guests. Considering how lonesome the surrounding area was, it looked as if every single person in a five kilometer radius had suddenly decided to visit.

Zum Alfons brews its own beer – even two types of it, a “normal” Helles and a wheat beer – and it is totally drinkable. It also specializes in Speck, which one can buy to take home, and this Speck was the Brettljause’s indisputable highlight. Perfectly smoked and with a highly appetizing smell, it tasted fantastic with the different types of fresh bread rolls. Very unusually, the rolls were free of charge, and even though the Jause itself was not cheap, considering its size and the complimentary bread, it was a very good deal.

Two types of the Speck were served, and the other two types of meat included – a Geselchtes and a Schweinsbraten – were fine as well. On the other hand, the ham and the cheese looked like an afterthought or a simple plate-filler. I don’t know if they had come from a supermarket, but they tasted as if they had. The taste of the Liptauer spread was great at first, but there was simply so much of it, that eventually eating it became more laborious than pleasant.

I left Zum Alfons feeling so full, that I actually looked forward to a two-hour walk back to the station. Unfortunately, despite the huge number of power line posts, the road back was totally devoid of street lamps, and although I do not mind walking in nearly complete darkness, I could not help feeling slightly uncomfortable knowing that I was about 200 kilometers away from home. And that is the problem with Zum Alfons: it is a very nice place by itself, but getting there and back is so painful that I don’t see myself returning soon.