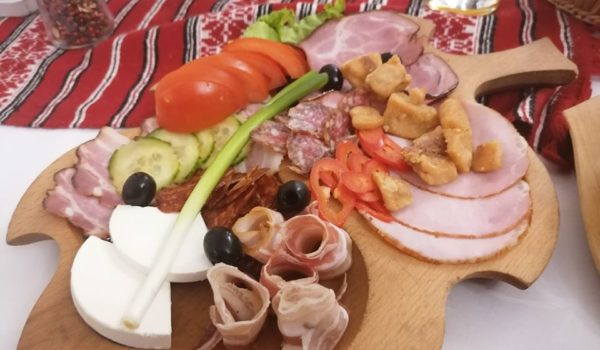 If anyone had told me a few years ago that I would be prowling obscure Romanian restaurants in search of a Brettljause, I would have laughed. OK, not exactly laughed, but taken such a prospect with a considerable skepticism. Since the pleasant surprise of Restaurant Bukowina, however, I have been much more willing to accept that Romanians know their stuff when it comes to cold cuts. Thus, I did not hesitate long before entering Casa Miorita, a rather inconspicuous small restaurant in a Viennese district full of all kinds of establishments except, well, Viennese.

I must say, while lacking the “wow” factor of the Bukowina’s Brettljause, the “Kalte Platte” of Miorita was nicely presented and looked very appetizing. Probably the best way to describe it would be a “typical Austrian Brettljause with an Italian flavor.” The Speck, the Geselchtes and the salami were definitely Austrian, while the fresh cheese, the olives, and the white bread hinted towards Italian influence. The only ingredients that might have been authentically Romanian was a spicy paprika sausage and big lumps of Grammel, that is baked pork fat. The presence of a green onion was also a nice touch, in my opinion; it is something any Brettljause would easily benefit from, yet is surprisingly rarely served in Austria.

When it comes to the taste, the Miorita’s Jause did not disappoint. The Speck had a particularly pleasant flavor, and under different circumstances I am sure I would have stayed longer and savored the dish slower, and maybe even ordered another small snack out of curiosity. Unfortunately, after a short while, all I could think of was to depart as soon as possible. First, there was the music – the most repetitive, primitive and annoying tunes I have heard in my entire life. Please don’t accuse me of cultural insensitivity – anyone who is not completely deaf would undoubtedly side with me. It was so bad that I would advise anyone considering a visit to Miorita to take earplugs with them. Or go to an especially noisy rock concert at the Stadthalle nearby just before.

It would also help a lot if you are Romanian or take a Romanian to accompany you. Unlike Bukowina, which is centrally located and has a good chance of attracting accidental visitors, Casa Miorita seems to be, unfortunately, strictly Romanians-only. From the waiter who spoke worse German than I to the fact that everyone in the restaurant seemed to know each other, I could not help feeling very much out of place. And that is a pity, because I would not mind trying quite a few other dishes on the menu.