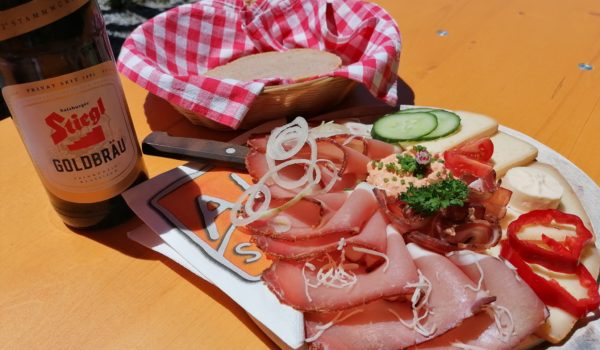 The key to hiking in the mountains is to be pessimistic. A sign says that the next hut is 1.5 hours away? Make it 2.5. A path is marked with a blue dot depicting it as a very easy one? Promote it mentally to a red one. This attitude is going to save you numerous missed buses, late dinners at hotels and, if you extend it to weather forecasts, may even keep you a bit dryer than you would have been otherwise.

It’s a simple rule that I am very good at ignoring. Today was a case in point: a brief glance at a map convinced me that the Arthurhaus in Mühlbach and Hinterthal, the village where I am staying, cannot be too far from each other. After all, they are next to the same mountain.

Well, mountains can be very long, as I’ve discovered, and tend to feature annoying springs that can only be crossed if one walks all the way down to the valley and then up the next slope. Thus, my journey that I hoped to finish in 5 or 6 hours took almost 9, and I was quite lucky that some of the later signs were wrong to my benefit (which is a very rare occasion).

I didn’t know that when I reached the “four huts” about two and a half hours away from the Arthurhaus, the last stop of the hiking bus. There are indeed four huts standing close to each other, but one of them had its doors and windows thoroughly barred, which left three of them. All three were open and serving refreshments, and the one that the people walking from the Arthurhaus see first had no spare tables, so I settled for the next one, the Molterau hut, which, while smaller, actually provided a better view.

Two Jause types were on the menu, but I got too scared of the “Game Jause,” having met quite a few fluffy marmots during my hike, so I settled for the traditional Brettljause and was not disappointed at the end. It was not particularly varied and very Speck-heavy. Two types of Speck were present, and I had to cut the fat off one of the types to make it easier chewable. In addition, the Jause featured two types of cheese (not particularly strong but definitely locally-made) and some Liptauer, which was highly enjoyable thanks to the bits of onions in it. A home-made butter was there, too, which is rapidly becoming my favorite ingredient of the Brettljausen of Salzburg.

It was a simple, no-fuss Jause, which did not impress but at the end of the day gave me enough calories to finish my stupid hike.