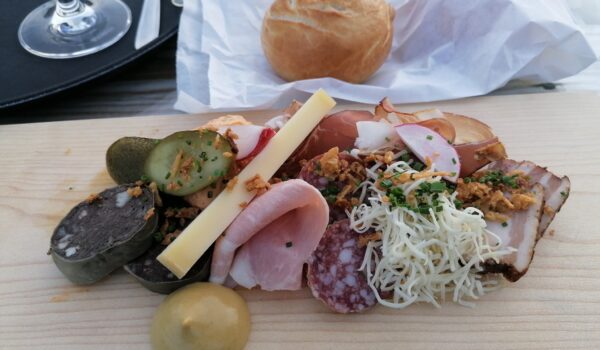 The only reason why you would want to have a Brettljause at Hans & Fritz is if you are rich and stupid. Being only one of them will probably suffice, but being both helps. This simple “pop-up” Buschenschank – in fact, nothing more than a container in the middle of vineyards with a few tables around it – is apparently a joint venture of Mr. Wieninger, a well-known Viennese wine producer, and Mr. Amador, a famous cook operating a very expensive restaurant in the 19th district. Wieninger provides the wine, obviously, while Amador is responsible for…. the crazy prices, I guess. You don’t need to earn three Michelin stars to make a Jause like this. A knife and a supermarket nearby would be totally enough. Cut some Speck, a slice of ham, two slices of black pudding (don’t bother removing the skin), a bit of cheese, salami and Wurzelspeck, add Liptauer, and you are almost ready. Wrap the board in plastic, send it up the hills of Grinzing, and soon you’ll be 12 euros richer.

The view is admittedly nice, but there is no service whatsoever and, in my case, no napkins or knives, making the spreading of the Liptauer quite a challenge. At the same time, there was no lack of wasps, which not only attacked my Jause, but seemingly wanted to be eaten. Combine this with a rather strong wind (not the Buschenschank’s fault, of course), and you can understand why my visit was much shorter and less pleasant than I had expected.

If you are rich or stupid or both, you should still be able, however, to appreciate the absence of tourists and the tiny bits of crunchy Grammel on the Jause. However, the best things I discovered as a side effect were two not-yet-visited Heurige with Brettljausen in Grinzing. Taking into account the small size of what I ate, I even briefly considered trying one of them but finally decided not to spoil the test and went for a beer instead.