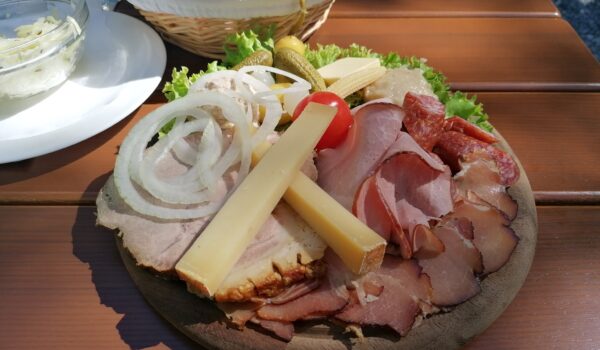 I guess it was the first time in my life that my Brettljause decisions were moved by social media, at least partly. It started with a visit to the Montafon area a few days ago, as part of my “discover the Vorarlberg” vacation. The visit to Schurns as a day trip from Bregenz showed me there was more to explore in the area – an idea I quickly shelved until my next visit. Then came an accidental click on an Instagram post from the Mühle Heuriger, which I for some reason follow (that can only be because it had followed me at one point in time as part of its “outreach strategy”), which showed that a potentially good wine/Brettljause place was just a few kilometers away from me. Finally, it was the general curiosity of where a Heuriger in Vorarlberg would get its wine from, for the only vineyards I saw in the region were in Bregenz, and I doubt they could produce enough grapes even to serve the needs of the winery they belonged to.

To answer the last question, the wine comes from the really good wineries of the Lower Austria and Burgenland. Probably someone had thought of the nice wine taverns they have in Vienna, Lower Austria, Burgenland, Styria and part of Carinthia and said, hell, why don’t we open one in the Ländle? Wouldn’t the tourists who have visited a similar place elsewhere look forward to finding one in Vorarlberg, too? Here is a great business decision, if you ask me.

To tell the truth, for purely subjective reasons, the Mühle had better been really good, for the day did not start well for me. To begin with, Gaschurn is two hours away for the village where I am staying, and having to change from bus to train to another train to another bus had created a fair amount of stress. The last bus in particular was absolutely packed, and I had to spend almost half an hour trying to keep my balance while the bus driver kept on pretending to be a Formula 1 pilot. Then I wasted time waiting in a queue for the cable car, while a group of cyclists desperately tried to fit their bicycles into the cabins, destroying a door of one of them in the process. Once I managed to board the cable car, I had to share it with a weird nervous lady, who simply could not sit still, constantly twisting her body left and right and taking stuff out of her backpack just to put it back a few seconds later. Finally, the mountain that the cable car took me to turned out to be a typical “fucked up” skiing mountain with hardly anything to do there. (I know that a few days ago I praised Montafon’s mountains for looking reasonably untouched, but I had not been in the Versettla area then). If you want an example of what mass winter sports do to the nature, take the Versettlabahn.

Although a beer at the mountaintop restaurant and a leisurely walk down to the cable car’s middle station had improved my mood somewhat, I had quite high expectations for the Mühle Heuriger to decisively turn a shitty day around. I am glad to report that it succeeded in that beautifully.

While the inside of the Heuriger appeared to having being designed by a really good architect, the garden was nothing special, looking like a place for the cyclists to stop by for refreshments (and quite a few of them did and drank more than sporty people normally do, which made me recall my own attempts at sports). The wine card was quite impressive, however, containing some of the quality wines I remember from my walks in the Wachau, Kamptal and Burgenland and at very reasonable prices, which I almost gave up finding in Vorarlberg.

The Brettljause looked very good and tasted the same. I really enjoyed the Hauswurst, which was somehow tastier and fresher than the dry old stuff one often gets elsewhere. The “meaty spread,” which I would place somewhere in between Verhackertes and Schmalz, was slightly weird – quite liquid and with a slight aftertaste of liver. I enjoyed it nevertheless, for the bacon-y flavour was totally to my liking. The crown jewel of the Jause was, nevertheless, the Schweinsbraten – thickly cut and with a wonderfully crunchy crust separated from the mean by a thick and unhealthy but super-tasty layer of fat. I have the feeling that the Schweinsbraten is something of the Mühle’s speciality, and if one day I end up in Gaschurn again, I would order the warm version of it straight away.

If I really had to criticize this Heuriget for anything, I would mention the strange jam that it included in the Brettljause instead of the much more common mustard, Very sweet, it would have worked well as a chutney for the cheese, had the cheese been very strong. Unfortunately, the cheese was of a rather moderate strength, and pairing the jam with the Schweinbraten did not result in anything revolutionary.

At the end, the visit to the Mühle has justified the long journey to Gaschurn. I am quite happy to have tried its Brettljause and can heartily recommend anyone holidaying in the Montafon area to give this Heuriger a chance. It might not a special type of a Voralbergian Heuriger (which I had thought it to be), but as an embassy of the Heurige of the Eastern Austria, it does its job perfectly well.