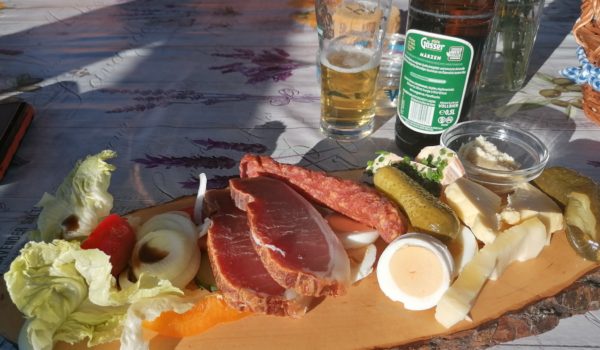 The Gschlößtal, which is a must-see valley in the vicinity of Matrei in Osttirol is indeed very picturesque. The problem is, it is also surprisingly short, and unless you go all the way up to the “Glacier path” and risk missing the bus back, you will struggle finding things to do before the bus’s departure shortly after 4 o’clock. OK, if you are like me, you will not particularly struggle; you are simply going to drink more beers than necessary.

Anyway, around 4:30 I was back in Matrei and was still feeling unspent strength in the legs, so I turned towards the Klaunzenerg, a mountain just above the town that I eyed the day before. There was a sign towards some snack place called Kuenzer Alm, promising a two-hour journey by foot or a 20 minutes one by car. Two hours seemed quite reasonable (after all, that was roughly how long I spent waiting for food at a restaurant in the Gschlößtal), so I did not hesitate and started walking up. And up. And up. Along almost empty and curvy asphalt roads and wide forest paths, with nothing, expect the town quickly disappearing below, telling me about my progress.

When I reached the hut almost exactly two hours later (the sign was quite exact), I was dying for any kind of drink and hoping that the restaurant was open. I was lucky: as I approached, the last customers were leaving, and the lady owner pitied me, brought a beer and even did not mind when I asked for a Brettljause.

As you can see from the photo, it was another “typically East Tyrolean” Jause, containing Speck, Hauswurst, cheese and the obligatory one extra ingredient. In Kuenzer Alm’s case, that extra ingredient turned out to be a different type of cheese, a soft one.

East Tyroleans are welcome to disagree, but generally I find their Brettljausen tedious. I love the Speck and the sausage, no question, but the portions are too big and not varied enough to prevent the eating from turning into a fight very soon. What helps to keep the interest are the “sides” such as eggs, onions, cucumbers and such. Fortunately, the Almjause of the Kuenzer Alm had enough of these, and also two large lumps of butter, so I could finish the dish without too much struggle.

I would never recommend Kuenzer Alm as a second hike on the same day. The climb is too laborious, and the descent is not much better, especially as I was rushing to the hotel and managed to take a wrong turn somewhere, resulting in the last hundreds of meters of my journey taking place on a dark forest path, a steep hill and, I believe, through someone’s garden. But it is a nice and relaxing destination if you have the whole day in front of you and no particular reason to rush. An e-bike would certainly help, too.