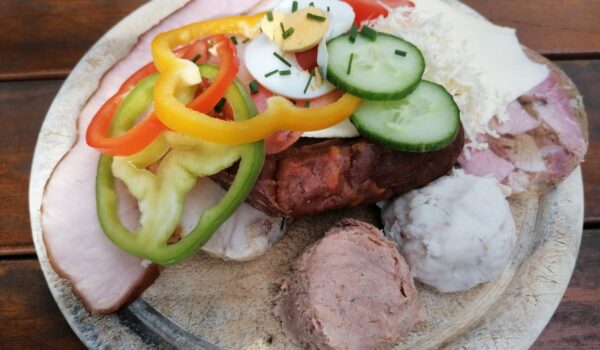 Apparently, Malli has the steepest vineyard in the entire Austria. As a result, plenty of items in the menu have the word “steep” next to them, although the prices, fortunately, are not affected. Neither are the Brettljausen.

Three of them were available, and I went for the thickly-cut “Roman” one, which is supposed to be identical in the ingredients to the thinly-cut standard Brettljause. I suspect it is also bigger, because it would be weird to change an extra euro just for doing less cutting. And big it was, making me seriously struggle to finish it despite arriving reasonably hungry. Partly it was because of the liver spread and the headcheese, which as usual I tried to finish first in order simply not to see them in front of me. I can’t say I enjoyed them, but they were quite edible and not too livery or wobbly.

The rest of the Jause consisted of a Schweinsbraten (called Brustl in this area), Geselechtes, a hard Hauswurst, a ball of Schmalz without Grammel and two types of cheese. One of them was a boring sort, proving once again that Styria is not a cheese region, but the second slice, well hidden under the vegetables, turned out to be sheep cheese, which finally ended up as the highlight of the dish by having a stronger taste than all the other ingredients together.

It was a solid, authentic Brettljause that was somewhat on the bland side. Even the traditional beetle beets salad with pumpkin oil, which I took to jazz it up could not really change its appearance of “a lot for food for hungry people.” If I knew I would be going back to the hotel right after finishing it, I could have probably ordered another glass of wine to awaken the appetite, but as an early lunch it was simply too heavy for me.