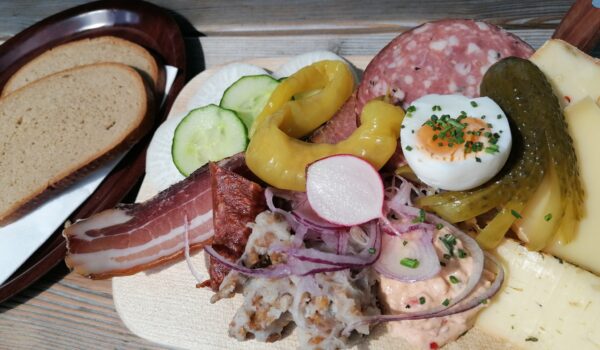 You can tell if you are in the mountains of Salzburgerland simply by tasting the butter from the Brettljause. OK, hopefully you would know that you are in Salzburgerland by some other, more obvious means – like, by having booked a hotel and traveled there – but it’s a fact that the farms of no other Austrian state make better butter than the high alpine pasture farms of Salzburg. The rest of a Salzburg’s Brettljause varies greatly though, and may include, for example, many kinds of similar-tasting cheese or supermarket Speck. Generally I find that Tirol provides more authentic ingredients at the expense of variety, Lower Austria provides variety at the cost of authenticity, and Styria somehow manages to do everything right. Most of the time.

I am happy to report that Dr.-Heinrich-Hackel-Hütte has managed to serve a Jause that would not look out of place in a TV program about the lives of “real farmers” in the Alps (but without the obligatory yodeling songs). It even arrived, as the unwritten rule prescribes, with a sharp knife and no fork. (I was quite happy, nevertheless, to find plenty of forks and blunter knives, which are much more convenient for spreads, in a jar on the edge of my table.)

As I said, the butter was exceptional, but the cheese, too, was much better than expected. Three types of it were included, and although not particularly strong, all three had distinct flavors. The two types of Speck were served as authentic thick slices, which is when the sharp knife comes handy. Unless cut thinly or into very small bits, Speck become notoriously difficult to chew – the fact I had learned the hard way. Of the remaining ingredients, I really enjoyed the Grammelschmalz and, especially, the Hauswurst. The latter was unusually tender and for that reason quite different from the sort I am used to buy at supermarkets. It was a pity that only such a small slice of it was included.

Located above the ski and hiking village of Werfenweng, the Hackel hut is not at all difficult to reach whether you are walking uphill or descending from the cable car’s upper station. At the same time, it does not create an impression of a fake tourist-oriented restaurant. If you decide to spend a weekend in Werfenweng (which is kind of enough to see most of it), keep this hut in mind.