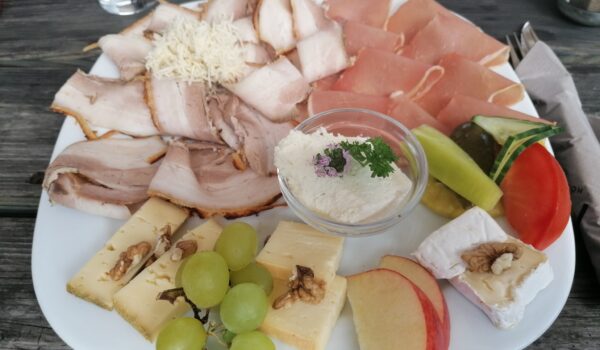 My first encounter with a Brettljause of the West Styria, better known as Schilcherland after its famous wine sort, finished with a lengthy talk with the Buschenschank’s owner (I happened to be his only customer that evening), during which he educated me on the best places to eat in the surrounding area. I withheld myself from pointing out that the food I was really interested in was Brettljausen in order not to sound as if I did not like the one he had served me. Unfortunately, his preferences were, basically, big portions of down-to-earth food, cheaply. I listened attentively and silently, however (the only time I strongly objected was at his suggestion to try a squid), struggling to grasp familiar words despite his local accent and my wine-affected understanding. Among the stuff I understood, the location’s name “Sankt Stefan” came up quite often.

This morning, with a very slight handover, I went hiking and, having no clue about the area, decided to climb a nearby hill to look around and then follow a path towards St. Stefan. Although I did not actually reach the center of that village (and probably missed some delicious squids), at the end I found myself on a picturesque hill nearby that was – as I discovered much later – one of the most famous vineyard areas in the entire West Styria.

What attracted me, however, was a spacious and friendly-looking Heuriger, which simply had to provide Brettljausen. It served quite a few different ones, as the menu confirmed, and while sitting there drinking glass after glass of wine (not that I intended to get drunk, but the sudden downpour left me with nothing else to do), I was observing people at the other tables receiving very impressive and very varied cold cuts platters.

Unfortunately, following one of my less effective unwritten rules, I ordered the most expensive Brettljause on the list, and ended up with something sophisticated and almost healthy-looking, but perhaps not very representative and not the best of what the tavern had to offer. Two ingredients were featured most prominently on the plate I received: nearly fatless smoked ham and Schweinsbraten (called Brustl in Styria) with a wonderful golden-brown crust. Apart from that, there were three types of cheese, a white spread, as well as some grapes, chestnuts and a couple of apple slices.

All in all, the dish looked like something to complement fine wine – namely the all-important Schilcher – rather than to fill one’s stomach. But if at first I had some regrets comparing my scarcely filled platter with the planks bursting with meats and cheeses that other customers were having, those regrets quickly evaporated once I tried the Schweinsbraten and the spread. The Schweinsbraten was one of the best I have ever had: crunchy, perfectly salted, neither too fat nor too lean, and without a single piece of cartilage. The spread was very creamy and had an extremely delicate flavor of cheese and herbs. I could easily imagine myself eating it every day for breakfast, if only I knew what it was.

Compared to the above two ingredients, the ham and the cheeses tasted unremarkable, though were obviously of very good quality. Serving stronger or at least more varied types of cheese is probably the only advice I could give this Buschenschank. In all the rest, it was top-class.