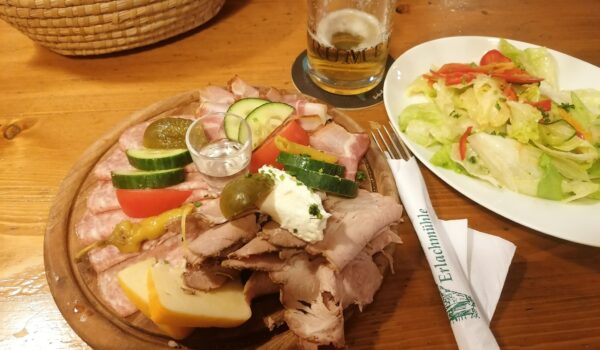 When it comes to Brettljause locations, Mondsee is really weird. There are at least two “Jausenstationen” (snack places) around the lake, but their opening hours make no sense: they are open on three days during the week, but not on Saturdays or Sundays. Are they trying to avoid customers or what?

That fact left me with Erlachmühle, a hut mere two kilometers from the town of Mondsee, where I was staying. Unfortunately, my earlier hike today went for much longer than expected, so by the time I reached the hut, sitting outside was out of question: it was almost completely dark, and quite chilly, as expected in late September. Through the window, however, I could see an Austrian family battling an enormous Brettljause.

It must have been a special “family-size” Jause, for the one I received was quite modest and ordinary. The Schweinsbraten shared the plank with Speck, Wiener, a creamy spread with herbs and two thick slices of strongish cheese. A shot of schnapps was present, too, but it was too small to even be called “small.”

Hungry after my long hike, I was quite happy with this Jause, an extra salad compensating for the lack of “green sides.” The Speck was the best ingredient, tasting like something that could be produced locally. The rest was OK, but frankly not worth coming back for. Actually, the most exciting part of the visit was to get back to the town, walking through complete darkness, with only my phone serving as a torch.