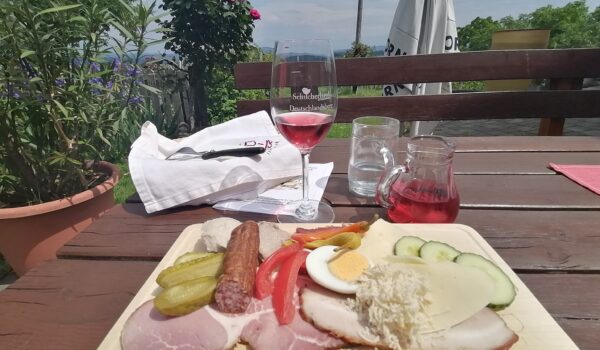 Most of the people I know who have never tried riding an e-bike think that it makes cycling all but effortless. Some people are actually surprised when I tell them that turning the pedals is still required if you want an e-bike to move. While I usually try to rent an e-bike when I visit the hilly wine areas of Styria, it is more in order to cover long distances than to easily conquer hills. The fact is, e-bikes are generally highly capricious beasts and may decide to stop helping you exactly at the moment when you need their help most, that is in the middle of a steep climb. They are also heavy as tanks, and if the slope is steep enough, restarting an e-bike in the middle of it requires quite some skill and luck.

The reason I am saying this is because having cycled for only 20 km from the village of Stainz, where my hotel was located, to the region’s central town of Deutschlandsberg, I was feeling quite exhausted. I was tired to the point that when I saw that the Buschenschank Jauk would only open in three quarters of an hour, I decided to spend that time dozing on a bench instead of attempting to find a different place to eat.

When I entered the tavern’s garden punctually for the opening, I was glad I had waited. The view from the hill on which the Buschenschank was beautiful, and the rose bushes planted at the end of each vine row gave off a fantastic smell. All this certainly deserved a big glass of Schilcher.

Unfortunately, the Brettljause, when it arrived, was a bit of a letdown. While thickly cut, the slices of Schweinsbraten, Geselchtes and Speck did not look very appetizing and tasted even less so. The cheese was there seemingly only for the sake of fulfilling the requirement of having cheese, and the Schmalz was so plain that simply calling it “pig’s fat” would have been more honest. I could have even attributed my failure to appreciate the flavor of anything on the Brettl to sudden symptoms of COVID-19, but thankfully the last ingredient, the liver spread – basic, but expremely liver-y – proved than my sense of taste was not completely gone. I actually left that spread nearly untouched.

I left the Bushenschank bored – almost as much as when I arrived, but for a different reason. The Brettljause was simply too bland to leave any impression, good or bad. I can heartily recommend Jauk’s wine, even the Schilcher, but for a snack, better head somewhere else.