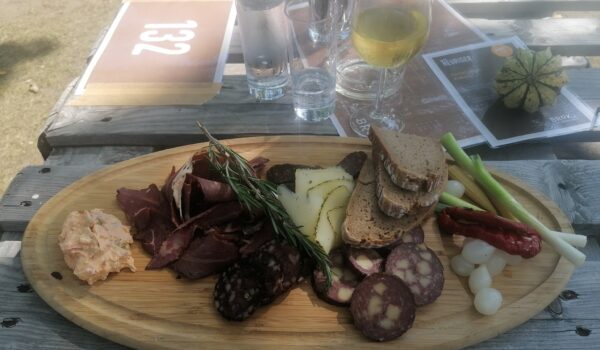 Cycling around the lake Neusiedl is a highly overrated experience. First and foremost, one doesn’t have much of a chance to see the lake. The situation is slightly better on the eastern shore, where one does get a glimpse of water here and there, but on the western side, there are three or four public beaches only, and they are a couple of kilometers away from the cycling path, so most of the time, one cycles through nice but same-y villages, all offering plenty of places to get pissed in.

The big advantage of the Bio-Landgut Esterhazy is that it’s situated between two villages and offers a sort of a farm atmosphere, albeit highly stylized and tourist-oriented. Esterhazy calls itself a “pop-up,” which has recently become the most popular word after “Corona.” I have no idea what restaurants are trying to achieve by calling themselves “pop-ups.” Lower expectations and reduced responsibility if they mess things up, perhaps? In Esterhazy’s case that would be inappropriate, because the place is huge and not at all cheap. The Brettljause I ordered made me almost 16 Euros poorer, and the wine and the soda water cost even more.

In the case of the Jause, the steep price could be explained by its being entirely game-based, apart from the cheese and the Liptauer, of course. Game is expensive, though I wonder if the dish wouldn’t have been better, had it contained a bit of a plain old domesticated pig. The problem with game is that it tends to taste better in the form of hard sausages, like salami or cabanossi. Thinly cut, the slices contain too much tough fat and become annoying after two or three. Harder sausages, on the other hand, require a lot of effort to chew, and in large quantities quickly become tedious.

Esterhazy has either overdone it in terms of quantity or plainly forgot to mention that its Brettljause is for two persons. There is really no point of serving four thick slices of cheese-filled sausage with four thick slices of pepper salami. No matter how good they are, they become almost inedible half way through. What helped, on the other hand, was the presence of cocktail onions and other bits of green stuff, which did a pretty good job of balancing the heavy salty sausages.

Had the Jause been half the size and half the price, I would have enjoyed it much more. The way it was, it simply made me tired, being too expensive to abandon it and too boring to finish it. It didn’t help that the music playing all across the Heuriger’s garden was more appropriate for seedy New Yorker bars than the wide open spaces of Burgenland’s “Land.” I did like my stay, but ultimately this pop-up is little more than a noble idea ending up as a pointless rip-off.