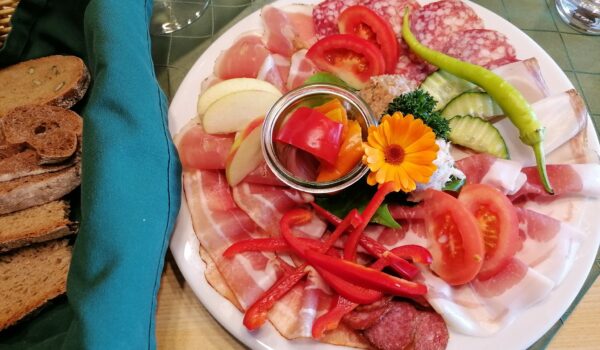 As I am posting this 500th Brettljause review on this site, I have a terrible confession to make. Over the past few months, I started to lose confidence in my Brettljause-eating abilities. Gone are the times when I could gobble two Jausen a day for the entire duration of my holidays. My younger stomach could manage them, but even then, it wasn’t easy and, let’s face it, it was stupid.

Recently, however, I started noticing that even finishing a single Brettljause was difficult. I noticed myself more looking forward to the green stuff found in the dish rather than the meats and cheeses. Sometimes, I even ordered a separate mixed salad and realized at the end that I enjoyed it more than the Brettljause. The piles of Speck and huge balls of spread were beginning to scare me, and on more than one occasion my brain told me “enough” long before the plate was empty.

Was it the time to stop all this cold cuts nonsense and consider launching a healthy food site?

An accidental visit to the Schneeberger helped me put things back on track, I believe. The Buschenschank appeared quite remote, but it was only because I stumbled across it while cycling from Ehrenhausen a few kilometers away. Why I didn’t visit such a remarkable place while staying at much closer Leibnitz last year is a mystery. Anyway, I am glad that the Wollschweine of Schneeberger did not evade me this time.

A Wollschwein, as Google explained to me a few minutes ago, is nothing else but a Mangaliza (or Mangalica, or Mangalitsa, as it is also spelled), a wooly kind of pig I have seen several times in Burgenland, close to their home, Hungary. Sometimes acclaimed as the pork’s equivalent of Kobe beef for its exquisite taste, Mangaliza’s meat is indeed incomparable to a plain old pig. Even when served in a non-imaginative way – as simple Speck and salami, – the fatter and tenderer Mangaliza pork tastes so much better that one cannot believe that these guys spend their days in the same mud as their traditional congeners.

Schneeberger took things one step further by subtly spicing the Mangaliza to make it perfect and serving it with enough “green stuff” to make the dish look anything but heavy. The Lardo melted in my mouth; the different types of Speck tasted of paprika and herbs; the Hauswurst had none of the usual “roughness,” and the Schmalz – I think – has the potential to convert the most devout vegetarians. The king of the plate was, however, a strange brown spread that could only be described as a cold pork burger that was minced again. It was so unique, it alone was a sufficient reason for visiting this Buschenschank.

Incidentally, the menu of Schneeberger also offers a “normal” Brettljause, but if I happen to be in the same area again, I do not see myself taking anything else but the Wollschweinteller. Not only was it the highlight of my short Styrian holidays, but it also restored my trust in Brettljausen and in my skills at consuming them.