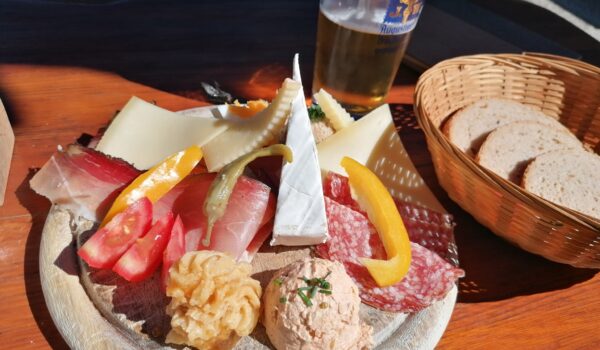 The Zwölferhorn cable car has gone through quite a few improvements since the last time I used it. Which must have been, like, ages ago, because during my last two or three visits to St. Gilgen it was closed for a complete reconstruction. Gone is the single old car, which looked like a 19th century fridge with windows. Instead, we are now riding multiple modern aerodynamic cars with some stickers with QR codes inside that bored children may scan to fill their little heads with tons of useless multilingual information.

Both the bottom and the top stations were subject to considerable redesign, the top one now featuring a soulless little restaurant with a view over the cables. Fortunately, the Voit’l Hüttle is still there, dwarfed by the nearby architecture of the new century, but still managing to serve a Brettljause that made me very happy.

St Gilgen and the Wolfgangsee being as touristic as tourist places can possibly be, it was nothing short of astonishing to find a Brettljause that provided non-industrial ingredients in impressive quantities. It had some Bratlfett, for example, which most tourists would regard with a strong what-the-fuck suspicion before spitting it out as something decisively non-vegan. There was also a Speck tasting like an expensive Speck and a salami looking like a real salami and not some poor sausage not quite sure what animal it related to.

The cheeses, including a soft one, actually tasted of something – not too strong, but better than nothing – but the real star of the Brettl was the Schweinsbraten, thickly cut and tasting like a serious piece of meat, albeit cold and rather old (the latter is not that important for a Schweinsbraten).

I have walked quite a lot around the lake Wolfgang, but so far haven’t found anything closer to a real Brettljause than the offering of the Voit’l Hütte. It’s Salzburg at its best and a perfect fallback plan for my later visits.