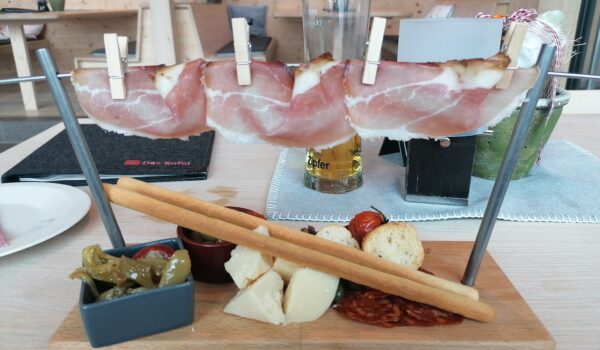 The Jause was indeed quick, but the preceding story was not, so get ready.

The Patscherkofel is considered the “house mountain” of Innsbruck and is easily reachable with the bus “J,” which is a rather cool bus, since it connects two cable car stations at the opposite ends of the city. Despite my love for Innsbruck and numerous visits, I have been on the Patscherkofel only once, during my very first stay, and do not remember much apart from the annoying wind. Today I decided to fix that omission, and although the weather forecast was anything but good, the first half of the day was beautiful, combining sun with fluffy clouds over the peaks.

Much has changed since my last visit. The old cable car in the village of Igls has been dismantled, and the new one is very modern and features a panoramic restaurant at its top, called Das Kofel. Visiting it was not in my plans, as I was looking forward to a Brettljause-free day, unless I found something extraordinary.

A three-hour-long slow and easy hike via the mountain’s summit brought me to a self-service hut with a Brettljause on its short menu. I had a moment of hesitation of whether to try it, but settled for a beer on a terrace instead. Had I chosen differently, my day could have taken a rather extreme turn.

I was almost done with the beer when a big group of hikers with kids rushed out of the hut with the screams “run, quick, the weather is changing.” I did not see any particular change, actually, perhaps it only became somewhat chillier. But it was still sunny and from the terrace I could see no danger whatsoever.

This was because the terrace was not facing Innsbruck. Once I walked around the hut, the view over the city was frightening. Everything was dark, as if the time was 9 p.m. rather than 2:30. A thin and extremely long white cloud hung over the buildings, while from the west darker clouds were quickly approaching, which could only mean one thing: the forecast was right, after all. Some seven or eight kilometers down the valley it was already raining hard.

Thus, I started my run towards the cable car’s station, or at least in the direction where I believed it was. In the meantime, the weather was changing every minute, with a thick fog rising up, so that soon the only thing I could see was a few meters of the path in front of me. I could not resist making videos, of course, but tried to walk as fast as possible without breaking a leg.

At one point I caught up with an elderly pair, who were well-equipped with hiking sticks and water-proof clothing. Bizarrely, a few meters in front of us, a Dutch family with two kids was sitting on the grass, obviously having no clue what to do. As I speeded on, they rushed towards the hiking pair for an advice. I hope they got the only good one, which was “escape!”

Just as I lost the strangers behind me, the rain started. It was mere few big drops at the start, nothing that the hood of my rain jacket could not handle. Just a few seconds later, however, my hood was attacked by hundreds of ice pellets, which, while not bigger than five millimeters in diameter were nevertheless traveling with a huge speed and hit me quite painfully. I was very lucky I had an umbrella with me, which stopped the pounding. Many times before, I told myself how stupid I must look to experienced hikers when they see me hiking with an umbrella, but under a hail, the umbrella was just what the doctor ordered.

Fortunately, the hail stopped just a couple of minutes later, which were enough, however, to soak my jeans and shoes thoroughly. A “normal” rain started, turning the path into a rapid brownish stream, but the fog quickly dissolved, and a minute later even the rain stopped. That is when I saw the cable car’s station just in front of me. The cars were not moving, and sirens could be heard from the city below. Perhaps the short “disaster” was sufficient to flood a few cellars.

With my travel downhill no more possible because of the cable car’s disruption, I thought that I more than deserved a beer and went into Das Kofel. The “Alpin Tapas” caught my attention, of course, and I ordered them as well, expecting a kind of a small and simple Brettljause for tourists. Waiting for it, I was happily sipping my beer and abusing the restaurant’s wi-fi sending videos of my adventures to friends and family. I continued to do that even after the dish arrived at my table, and having finished, began to make pictures of the weirdly-looking “Tapas” and posting them online.

Somehow, I missed it completely that the restaurant, almost full when I arrived, became eerily empty. Finally, the waitress approached my table and said that a warning had been received about a thunderstorm approaching from the mountains, and the cable cars would only countinue operating for another ten minutes. “So, I have ten minutes, right?” – I asked, eying the dish, which looked really small. “If you are lucky, yes,” – the nice waitress replied, – “but I would not bet on that.”

Well, that’s how I ended up having the fastest Jause of my life. Basically, I stuffed my mouth with everything at once and chewed quickly, helping with quick sips of the beer. There was not much “alpine” about the snack. Apart from the Speck, creatively attached to a pole over the plank using tiny clothespins, the dish was typical Italian antipasti – some hard Grana cheese, a few slices of salami, olives and various pickles. Not that I had much time to examine closely what they were.

At the end, I did catch a cable car; the operation stopped mere five minutes after my reaching the bottom. And a thunderstorm did come: without ice pellets, but with more than enough rain, thunder and lightning. I will need to get back on the Patcherkofel during another visit to Innsbruck and try a “real” Brettljause at one of the numerous huts on its slopes. However, I think I will have another go at the Tapas of Das Kofel as well to better appreciate them and bring back good memories. They are anyway too small to affect my appetite.