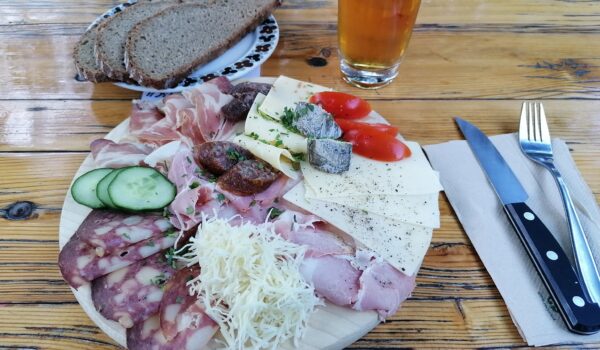 Located between a camping site and the picturesque Gleinkersee, Gasthof Seebauer can pride itself of serving the most expensive Brettljause every seen in a self-service restaurant. It’s also one of the fastest to make, apparently: having ordered it together with the beers and waited a couple of minutes for my turn at the cashier, I paid 25 euros (out of which the Jause cost 15) and received the dish immediately. I could even catch a glimpse of the cook putting a huge leg of ham back in the fridge. At least the ingredients didn’t come out of a supermarket’s plastic.

Not that I was expecting them to. The Seebauer displays a huge board outside the restaurant, listing its suppliers, all of whom come from the same region. And one can taste the truth of that. The ham and the Speck were great, beaten only by the Hauswurst, which was not as good as it was strange. Biting through the hard skin, I suddenly found weird emptiness inside, as if the makers had forgotten to fill the sausage with enough meat. No industrial sausage would ever taste like that.

I was less impressed with the cheese-filled sausage. I generally question the purpose of such combinations, for the cheese bits in them are too fat and never fresh, while the meat part is too hard. Neither did the cheese convince me; it was too ordinary and anyway quite underrepresented in comparison to the meats.

Unfortunately, the restaurant suffers from being self-service. Having to queue for the order and then carry the heavy tray oneself does create respect for the work of the waiters, but significantly reduces the pleasure of eating, adding a fast-food feeling to it. It is a pity, because the restaurant’s location is top, and they could have turned it into something quite special. The way it is, it is hardly worth the long hike from Spital am Pyhrn, the village where I was staying.