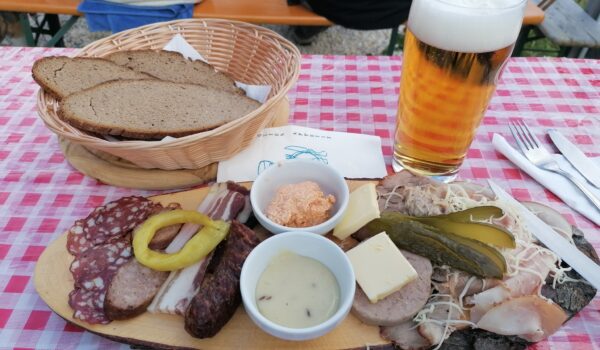 It is well known that the weather in the mountains can be unpredictable. Indeed, during the long but not particularly strenuous 1.5-hour hike from the upper cable car station of Kaiserburg, I experienced bright sun, dark clouds and even thick fog. I wish I had the same kind of variety during my stay at the Walderhütte. Unfortunately, the first couple of minutes of sun were followed by an hour of sunless, freezing cold. The worst thing was, I could still see the sun illuminating the alpine pasture mere 50 meters away from the hut, but never reaching its terrace. Under such conditions, even the cold beer was less than enjoyable.

While the weather was not varied, the Brettljause certainly was. Generally, it followed the pattern of yesterday’s Jause, making me think that all the Brettljausen of Carinthia are governed by some strict state-wide law. Two types of Speck were there, as well as a very hard Hauswurst, a Verhackertes, some salami and the Carinthian specialty, the highly sticky Glundner cheese (while carrying the Brettl, the waitress accidentally dropped the small bowl of Glundner and the cheese did not spill out). However, this was just one half of it. A liver sausage was also present (mercifully only a single slice), another pale and spicy sausage I would call a Selchwurst (and possibly be wrong), a Liptauer, a Schweinsbraten and a thinly-cut ham. Like yesterday, I wished there was more green stuff, but it seems that the Brettljause makers of Carinthia have declared a war on the veggies. Which is their right, of course.

I did not manage to finish this Jause, but more for the environmental reasons. With a slight additional effort and maybe a third beer I could have conquered the dish quite successfully, but unfortunately by the end of the meal I was feeling seriously cold. The Walderhütte is recommended, but strictly on cloud-free days.