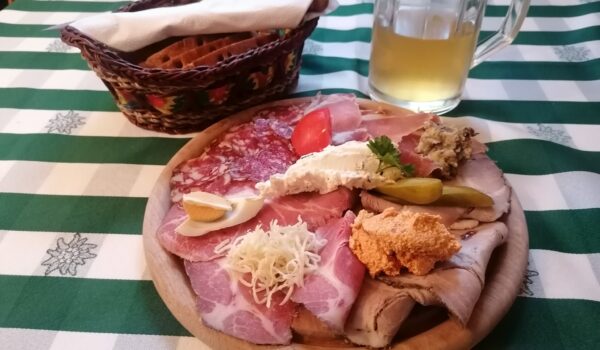 As a friendly bus driver explained me, the southern bank of Wörthersee is full of expensive villas and private beaches, while the northern bank is basically a village. I am not sure I agree, having spent my weekend on the northern back and paid much more for my food and drinks than would be reasonable, but I do confirm that Pörtschach is cheaper in comparison to, let’s say, Velden (which is absolutely stupidly expensive).

Brock does look like a village tavern, however. There is a more expensive and much more popular restaurant right next to it, but this Buschenschank stands out on its own, featuring as many as three tables outside and a couple of gloomy rooms inside. The tables outside were either occupied or reserved when I arrived, so I had to settle for an indoor table, which looked a bit creepy at first, until another group of customers joined (and left after a couple minutes, probably finding me too creepy).

If Brock were to win an award, however, it would be for the speed of the service. I don’t remember any place that would serve me a Krügerl of Most within 15 seconds of the order. It is as if there was an open barrel of Most standing outside the door and all that remained for the waitress was to scoop up half a liter with a mug. The Jause did not take much longer to be prepared; I hardly had time to open a news web site on my phone to read something depressing as it suddenly appeared on my table, looking rather hastily prepared, with spreads having the shapes suggesting they did not especially like leaving the spoon.

Still, it seemed highly authentic and appetizing. Apart from cheese, all the usual ingredients were present: Speck, Geselchtes, Salami (two very similar types of it), Schweinsbraten, Liptauer, Schmalz and even a cottage cheese spread. The Speck was the best of them all, having just the right levels of saltiness and dryness. The Schmalz and the Geselchtes, on the other hand, were oversalted to almost the point of unpleasantness. The Liptauer did not convince me either, being so thick that I could feel lumps of cottage cheese in it.

The rest of the Jause was completely fine, and I feel I should have it enjoyed it more, and would have, had the weather been friendlier and could I sit outside, preferably tired after a nice long hike. I was tired, true, but rather from being stuck for five hours in an overcrowded train with faulty air conditioning. Thus, today I would have preferred a less “village-y” experience, with hot food and an excessive amount of beer to repair my nerves. Apart from the obsession with salt, there is nothing wrong about Brock; it just happened to me at a wrong moment.