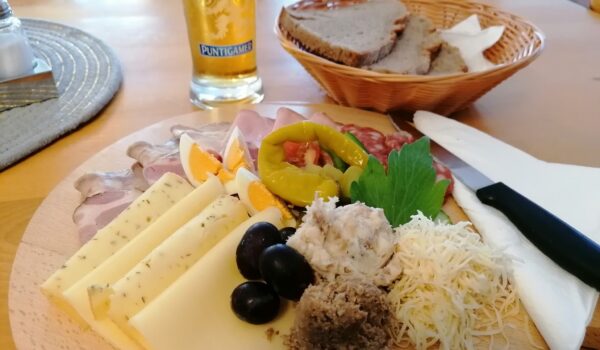 Kaiserhof has “Heuriger” in its name. On the sign, the word “Heuriger” is enclosed in quotation marks, and there is probably a good reason for that. Clearly, Kaiserhof does not produce its own wines; the “wine recommendations” standing in the room’s corner come from the same region but are produced by someone else. If anything, Kaiserhof looks like a convenient place in the village center for the locals to gather for a beer and a snack on Fridays. Compared to “real” Heurige in the vicinity, it is too dark, too simple, and too closely located next to the village’s church. It also specializes in burgers, for God’s sake.

I was not expecting a good Brettljause (while waiting for it I was actually blaming myself for not choosing a better place), so got very positively surprised when it turned out good. Later on, when reading on the restaurant’s web page that all the ingredients came from the local producers, I understood the origins of the great taste, but my first impression was very favourable and powerful.

Apart from a bit of cartilage in the Schweinsbraten and the expected bland cheese, there was nothing to complain about this Brettljause. Both the Verhackertes and the liver spread were excellent, and when I say this about liver, it must be quite special indeed. The salami and the Geselchtes were top quality, and the presence of a few grapes and a truly strong Styrian horseradish made the dish much more enjoyable than the ambience had seemed to suggest. I would not go as far as to recommend going to Kaiserhof, but if you end up there, do not consider that an error.