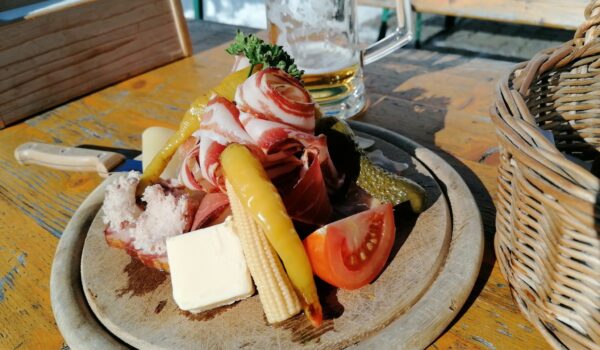 What? A week-long holiday and only one Brettljause, hastily squeezed into the last day, just before catching a bus back to Vienna? What is up with me? In my defense, winter is not a good season for Brettljausen in general. Over the past few days, I have had several Speckbrots and a Käsebrot or two, but no restaurants I visited offered a completely normal, traditional Brettljause, including a few restaurants that I can bet had it in summer. Apart from the Unterhof Alm.

Visiting the Unterhof Alm was one of the must-haves of my short holidays in Filzmoos. More than three years ago, I visited Oberhofalm, its close neighbor, and left so impressed that I declared it the top place for Brettljausen in the entire Salzburg region. From what I understand, the Oberhofalm was the original hut in the area, while the Unterhof Alm, which opened later, belongs to the Unterhof hotel in Filzmoos (in which I, incidentally, stayed during my last visit). This is not to say that the hut it occupies looks more modern than the one of Oberhofalm. Actually, both of them look just as urig as they are heavily touristic. Due to their perfect location just an hour and a half of leisurely walking from the village, easily accessible in summer and winter, both huts are a famous visitors’ destination and are quite full most of the time.

It is easy to recognize why. The surroundings, already gorgeous in summer, look as if coming out of a fairy tale in winter, especially on a sunny but cold day like the one I was blessed with today. I decided to sit outside, logically concluding that cold cuts cannot get too cold, while the beer only gets better when chilly.

It is, of course, wrong to expect dishes to look as beautiful as the places where they are served, but I could not help feeling a bit disappointed when I first saw my Brettljause. It looked very simple and light, combining a ball of Verhackertes with two quite similar types of thinly cut Speck and a few slices of cheese that screamed “I am boring!” Looking under the Speck made me immediately feel better, however: hidden below, I found a large thick slice of Geselchtes, an alike slice of Schweinbraten and a half of a Hauswurst. My lunch was saved.

The Hauswurst was the ingredient I liked best at the end, mostly because it had more flavor than all the others. Perhaps the cold was to blame, but nothing else felt as tasty as I had expected. The Verhackertes was especially dissatisfying, because normally that spread has a very strong taste, at least a taste of salt. In Unterhof Alm’s case, it was just a bland gray mass that had less flavor than the butter between it and the bread.

However, not being overly delighted with the Brettljause does not mean that I left unhappy. Quite the opposite, the visit to the Hofalmen was a great conclusion to my holiday, and I was very glad that I had decided to go there instead of travelling back to Vienna immediately after the checkout at the hotel. The Brettljause was good, better than average even, and eating it surrounded by snowdrifts was pure joy. It might have tasted better in summer, though. Possibly, Brettljausen are truly not winter food.