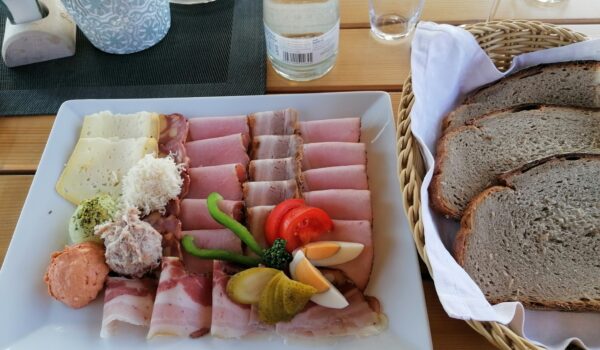 It was yesterday that I ate this Brettljause, and today, when cycling around I could not help showing a picture of it to an elderly guy in a hut some 30 kilometers away from where I was staying. “Oh, it’s a modern one,” he waved dismissively before switching to talking about the advantages of Carinthian Speck, despite the fact that I was, like, only 200 meters into Carinthia (the Speck was good, though).

He was, however, wise into spotting the main problem of Haring’s Brettljause. It was indeed too modern, like the entire Heuriger that had produced it. But one has to look at the matter positively. If one ends up in Eibiswald, a small town in West Styria close to the Slovenian border, one does not really expect a fancy Brettljause, and if a Heuriger comes up with several Jause choices and some extremely tantalizing wines, one does not really complain about the place being too modern. I found it quite OK, actually. It would have definitely benefited from the absence of stupid noisy Austrians, who tried to act like comedians and failed. On the other hand, I am kind of used to overexcited tipsy locals of post-retirement age and learned to ignore them, so I did my best to concentrate on the wines and the hard work of removing cartilage from the Schweinsbraten and the Speck.

That work was annoying and really unnecessary. If I had paid more attention to the menu, I would have realized that my “Winzerteller” was different from the cheaper “Brettljause” only by having its ingredients finely cut. In other words, I could have received an easier to cut and possibly more pleasant to eat Jause by paying 50 cents less.

Of all the ingredients, Speck impressed me most. With the cartilage removed, it was very enjoyable thanks to its tough consistency and sufficient amount of salt. From the three provided spreads, the Verhackertes came out as the strong winner, because the green pumpkin spread and the Liptauer were too thick and tasted “fat” as a result. The other meats were OK, and the Tilsiter-like cheese actually had some flavour, but the way they were presented on a rectangular plate (no Brettl!) somehow hinted at their supermarket origin. I might be totally wrong, of course, but that was the first impression the dish made.

For the first evening in Eibiswald, one can do much worse than visiting Haring. It is such an obvious destination that I was probably lucky finding a table there on a Saturday evening. Most likely, all the usual clientele was celebrating the erection of a maypole in the town center. Yet I feel that there are plenty of much better places around. Even the most expensive wine of Haring did not impress me, while the cheaper ones lose in comparison to some of the better wine makers close to Vienna. Haring is good enough but not great.