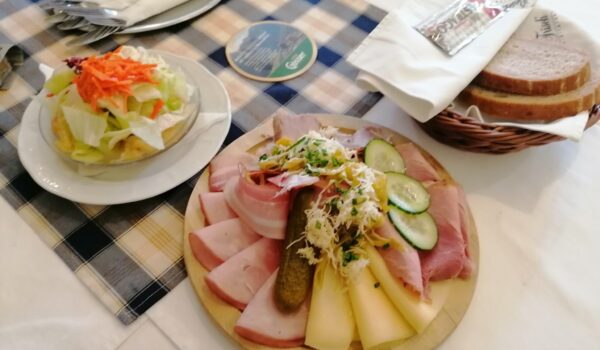 A new restaurant with a Brettljause in Vienna – hooray! Well, it can very well be that Steierhof has been around for a while, but either did not have a Brettljause before, or I simply missed it because of its untypical location near the Mexikoplatz in the 2nd district. It is an area you would normally consider dining in only if you love Balkan grill dishes and, preferably, speak Serbian. Of course, it can also be that the strange way the restaurant spelled the name of the dish – with a space between “Brettl’” and “jause” made it invisible to my Google searches.

Steierhof looks like a normal Viennese Beisl with a rather nice shady garden, and I would recommend sitting outside if the weather allows it and you do not mind the noise from the passing cars. Inside, the restaurant is clean but very simple. The room with the bar is adjacent to the kitchen, and there does not seem to be a door separating them. The only other room – the one I was sitting in – has just a few tables, a huge screen on one of the walls and a projector hanging from the ceiling. I can bet that the projector is there for showing football matches to drunken locals and not for displaying PowerPoint presentations during firms’ team-building events.

The Brettljause was simple, too, but its quality exceeded my initially low expectations. The Geselchtes and the Schweinsbraten were actually quite authentic and would not have looked out of place in a good Heuriger. The Speck, the ham and the cheese, on the other hand, were edible but of absolutely supermarket sort. The ham disappointed further by having a crust that was almost unpleasant to chew. And then there were two strange things. First, the two pickled cornichons that came with the Brettljause were sweet, and I mean seriously sweet, like a dessert. Second, the Pfefferoni was served cut into tiny pieces, as if it had been fed into a paper shredder. If the cook had to spend even ten seconds cutting it that way, it would still be a total waste of effort.

At over eight euros, the price of the Brettljause would have been slightly too high, but the complimentary Schnapps that came with it made it look fair. All things considered, the dish could have been much worse, and I left absolutely content. Maybe a mere fact of having Steiermark in a restaurant’s name makes its Brettljausen edible.