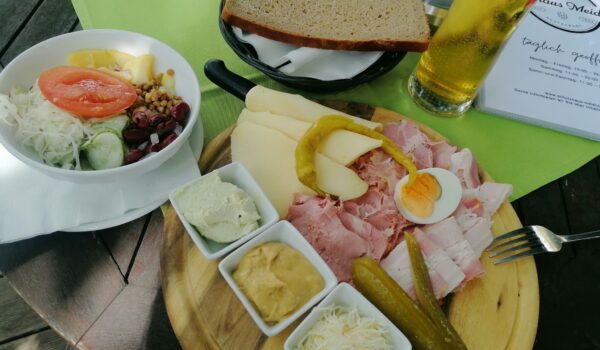 Vienna is full of Kleingartenvereine, or allotment garden clubs, which provide people with small pieces of land to do gardening or build on – for a relatively small annual rent, but subject to a mountain of regulations. Most of these clubs have a Schutzhaus – literally, a “shelter” – which is nothing but a simple restaurant where the would-be gardeners can relax, exchange their gardening stories or simply get drunk.

Schutzhaus Meidling is located in the working class 12th district and together with the nearby club members’ houses constitutes the nicer part of that area. Sitting in the Schutzhaus’s garden, one almost feels like being in a countryside, and that feeling grows stronger with each consumed beer. Unfortunately, every look at the Brettljause reminds one that one is in Vienna. The Jause is certainly Viennese, and not in a good way.

There was barely any variety, to start with. The only ingredients were Speck, Geselchtes, cheese and pumpkin spread, and I even find it hard to count the spread as an ingredient, because it hardly had any taste. The greenish color was the only thing indicating that pumpkins had somehow been involved in the spread’s preparation. The cheese, too, was weird. It was cut in unpleasantly thick slices and was so buttery, that the slices tended to glue to each other and melt in the sun. On a positive side, the meats were really good. The average score for the taste that I giving this Brettljause is all thanks to their freshness – and to the half-egg that the Jause was served with.

Had I been a member of the garden club, I would have probably had a soft spot for this Schutzhaus and visited it regularly, closing my eyes on small and not-so-small deficiencies. Visiting it for the first and possibly only time (the Brettljause, by the way, is only served in summer), one becomes more critical. It is a nice place to drink on a hot day, but its Jause is nothing special. The only exciting moment I had was when some guy called me from the other side of the fence in perfect English and asked if I could give him a few coins for a beer because he was totally broke. He walked away very happily with four Euros, making me for some reason jollier as well.