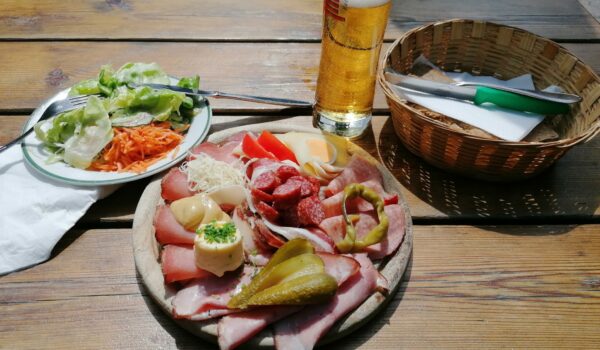 Natural park Riedingtal is a true Mecca for Brettljausen. Walking from the entrance, which is easily reachable by bus, up to the end of the valley, I counted five Brettljause-serving huts, and I am sure there are more. The further away the huts are, the more appealing the Brettljausen descriptions become, promising organic homemade stuff. On the other hand, the more remote huts looked empty, which must be because of less than welcoming weather higher up the path. It was for that reason that I finally stopped at Schlieferalm, which is located right at the park’s entrance but had a lot of people sunbathing on its terrace.

The Brettljause Schlieferalm served me was indeed more of a mainstream affair, with the “organic” nature of ingredients not guaranteed. It was, however, much better than I had expected from a place by a bus stop. Nicely presented, it contained five types of meat and one cheese with a strongish flavour and even featured a slice of an egg – the first one I saw in Lungau.

I cannot think of a single reason to complain about this Brettljause. It could easily go into an encyclopaedia as an illustration of what Austrian Brettljausen are, and the view from the Schlieferalm over the nearby lake was very relaxing. If the other huts of Riedingtal offer something better, my return there is inevitable.