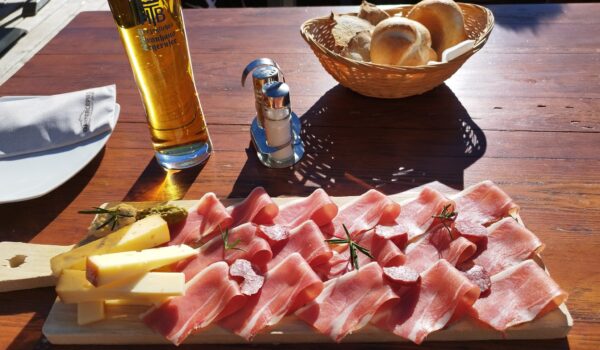 A bit of useless trivia about Grödental (in addition to the well-known fact that people there speak their own language). It seems to be a place where everyone is making wooden sculptures, of religious and non-religious themes. I saw six firms in that business in a single village while passing through it in a bus. There is even a local IT firm specializing in software for selling wooden sculptures! Probably wood-carving is what the locals do during the short breaks between the summer hiking season and the winter skiing season.

Considering the state of hotels and restaurants that I observed today, most locals are already deep into making sculptures. Four out of five hotels have “closed” signs on them and are undergoing some kind of reconstruction. All three huts that I met on my hiking path had their terraces cleaned of tables and their doors locked, although their websites made no mention of the closure, and Google clearly said that they were open.

Bar Ristorante Dantercepies is situated right by the mountain station of the cable car, and had I had a choice, I would not have considered dining in it, such an easy and obvious location it was. I believe that it, too, was just a few days of closure, because there was no menu, and the list of available dishes was delivered orally by the waiters themselves. There was a lot of “goulash” in the names. When I ordered the plainly called “bacon and cheese plate,” I thought I caught a glimpse of disapproval in the waiter’s eyes, which made me approach the dish with a certain prejudice.

Indeed, it looked very basic, although not badly presented. Mostly, it was Speck, decorated here and there with small slices of Kaminwurze. On one side of the plank, there were a few thick slices of cheese of the same kind, and that’s it.

The cheese was OK in a non-exciting way, but I immediately ran into a problem with the Speck: it had been cut slightly too thickly. Those few extra micrometers made each slice surprisingly hard to chew and swallow. Washing every slice down with beer without chewing was an option, but not at all an appealing one. Eventually, I made my way through the dish by cutting each slice into two or three and removing the white fat. When the waiter came back to pick up the empty plank and saw a small hill of fat on it, he exclaimed, disappointingly, “That is the best part of Speck!” Well, if he could eat it himself, I would be grateful.

I have a tradition of sorts, to choose for the last day of my holidays a route that is somewhat anticlimactic, so that going home feels less painful. In the case of Dantercepies, the choice was perfect, though it was not exactly planned that way. Even in high season, the Grödnerpass is not as interesting as the other locations in the valley. In the first week of October it looks like it is about to fall into a deep slumber.