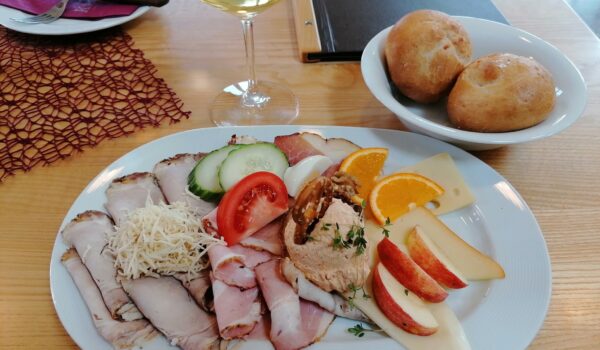 There can be no discussion that a sufficient variety is one of the key characteristics of a good Brettljause. If not for the different types of sausages, cheeses and vegetables that a quality Brettljause provides, people would have been carrying around hunks of Emmentaler and sharp knives and eat like pigs while celebrating the money they had saved.

The often overlooked aspect of variety, however, is that all the different ingredients have to work together. One would not want to put next to each other the ingredients that are too similar. On the other hand, it is counterproductive to combine, for instance, Gorgonzola with Wurzelspeck, for the strong flavors of both will fight, rather than complement each other.

Kropf seems to have mastered the variety concept quite well and also became proficient in the difficult art of presentation, but is still struggling to grasp the idea of “teamwork” among its Brettljause’s components.

Apple goes well with cheese, no one is questioning that, of course. However, there is little point in combining apple with three types of cheese that taste exactly the same. Likewise, adding a salty Soletti to a Liptauer spread might contribute to the overall appearance of the dish but do nothing to improve its taste. Oranges might also be a good company to cheese, but only when the cheese’s flavor is strong enough – much stronger than in the Kropf’s offering – or at least when there are no apple slices to compete against. Two types of Speck are a good idea as long as they differ in their taste and not only in their appearance. And the perfectly salted and juicy Geselchtes can seem completely out of the place when compared to the rather bland rest of the Brettljause.

Kropf’s Heuriger is really nice. It is modern but still relatively cozy, and the service is informal and mostly efficient (unless the waitress gets too involved in a chat and drink with the locals, which actually adds to the charm). The wines are great, and the cook obviously knows how to arrange stuff on a plate so that it looks good, but there is a certain magic missing in the whole experience. Kropf is the kind of a Heuriger where you would happily take your guests if they happen to visit the Wachau region, but is not the place that you would revisit alone. This may sound contradictory, but I hope you understand what I mean.