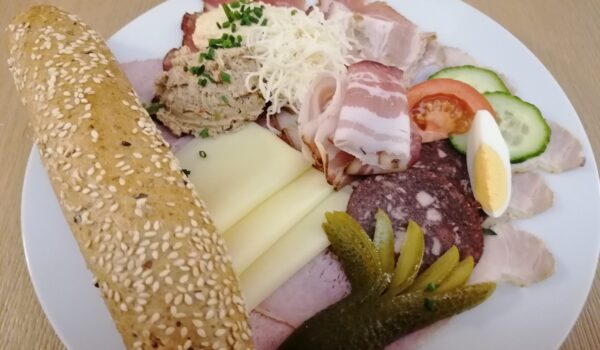 Almost exactly five years after my last visit to Stoiber, I went there again (finding a good Heuriger on the 2nd of January is never an easy task) and resisted hard not to take the fondly remembered “Saugut” platter. Instead, I went for the more conventional “Hauerplatte,” and the look of it disappointed me at first. It was served on a normal plate, lacked any decoration and did not appear very varied. It also contained the smallest slice of egg ever, making me wonder how many customers the Heuriger can feed with a single egg.

It got better afterwards. The grayish spread that I took for liver at first turned out to be spicy minced pork. As I shifted the stuff around, I realized that there were more different things to eat than I had originally noticed. The Speck and the Gesechtes both had a great taste, probably coming from the same quality animal as the stuff on the “Saugut” platter. The pale gray slices of dry pork, on the other hand, were almost tasteless, like the extremely plain cheese. The other parts – the Schweinsbraten, the Blunzen and the Liptauer – were good but unexceptional.

All in all, it was a somewhat unbalanced Jause, and if you visit Stoiber, I recommend you go for the Heuriger’s main specialty, the “Saugut.” Still, having found a Brettljause so early in the year, I cannot really complain.