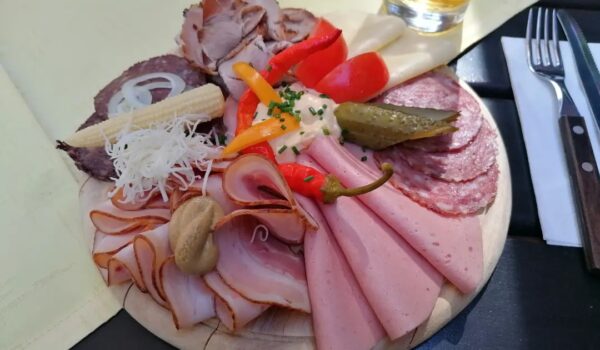 Schrems in Waldviertel is deep Austrian countryside. People don’t speak the same language here or have the same problems as elsewhere. The life here is mostly centered on potatoes. Planting potatoes, harvesting potatoes, selling potatoes. Eating quite a lot of potatoes, probably. But once in a while, even the inhabitants of Schrems and its surrounding villages have a special occasion to celebrate. Like the end of the potato harvest, for example. And then they get into their tractors and drive to the Waldschenke, which is one of the poshest places around. Meaning, it’s quite simple but safe even for a non-local to visit.

You won’t find a Brettljause on the menu here. You have to ask for the special Jausenkarte, which contains a large choice of different snacks, crowned by the Brettljause itself. (There is also a more expensive “Hüttenjause” for two persons, but I suspect it’s nothing else but the Brettljause times two.) And what you get is indeed a Brettljause, looking not much different from the one you can receive in an average Viennese Heuriger.

OK, it’s slightly better, since the nearest supermarket is really far away. The quality difference was most noticeable with the Schweinsbraten and the homemade egg spread, which I wish was featured more prominently, for it was over within seconds. The other ingredients were unfortunately nothing to be excited about. The black pudding was cold and tasteless, and the cheese, salami and Extrawurst could have as well come out of a supermarket’s plastic. The Speck was quite good, but again, nothing worth traveling 150 kilometers for.

The Waldschenke is nice in many ways, but the quality of its Brettljause is not one of them. I think one would be better off ordering something more village-y here, like Schweinsbraten or Cordon Bleu.