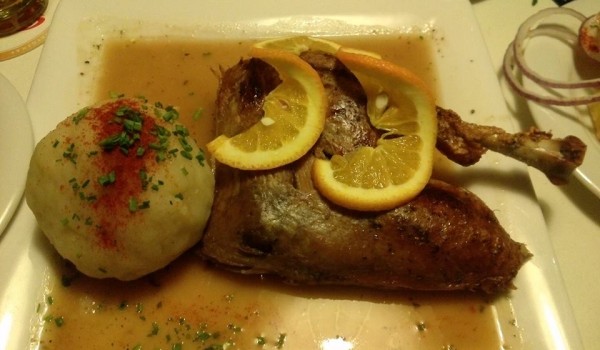 This was a totally spontaneous visit, and the fact that Lahodny had a goose proves that the bird was not fresh. On the other hand, it did not look or taste old either and was served with so much juice it was almost swimming in it. As a result, the meat was both juicy and tender, while the skin, despite its grayish color and a bit too much fat, was crispy and just salty enough. The red cabbage was interesting: slightly crunchy but not hard, sweet and overall pleasant.

On a negative side, the dumpling was incredibly soft and tasteless, serving absolutely no purpose. Worse still, the goose leg was full of bones – some long and thin, others tiny – completely mixed with the meat. Putting a spoon topped with meat in your mouth and spending the next minute pulling out the bones is hardly my idea of fun, in particular when dealing with meat and not fish. Last time I experienced something like that was when I ordered a rabbit in Malta.

Bones aside, this would have been a slightly better than average goose. Unfortunately, the bad bones experience has placed it firmly in the average camp.