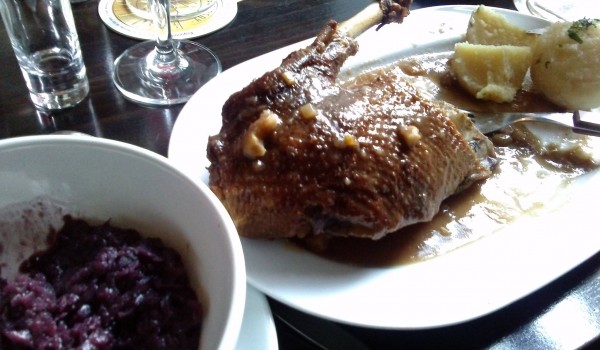 One does not expect to start a new season with an exceptional goose, but starting it with a worse-than-average goose is also somehow disappointing. Especially with a goose done without any love and with a very sloppy effort.

Tag.Lang’s bird must have been cooked well in advance (as I am talking about days rather than hours), then kept aside and heated up in a microwave. The result is a goose with quite a lot of meat, but the meat that is at the border of being too tough. Gray in color, it does not like being separated from the bones, but push it a bit harder, and it “unglues,” leaving the bones quite clean. The skin is dry rather than crispy, but under the dry top there are a 3 or 4 millimeters of quite unappetizing fat. Worst of all, the goose is served with a sauce that has obviously been prepared separately and used with different dishes. Not only did not it match the taste of the dish, it was also of insufficient quantity and not warmed enough; as a result it became disgustingly cold after less than ten minutes. The cabbage came straight out of paper box purchased in a supermarket at discount prices – completely bland and uninspiring. The two Knödels matched the cabbage by being totally tasteless.

I admit that I visited the restaurant at a wrong time (at 15:00), when the only other occupied table was used by the bored waiter. He was having his lunch; I don’t know what he was eating, but it was certainly not a goose. And I respect his decision.