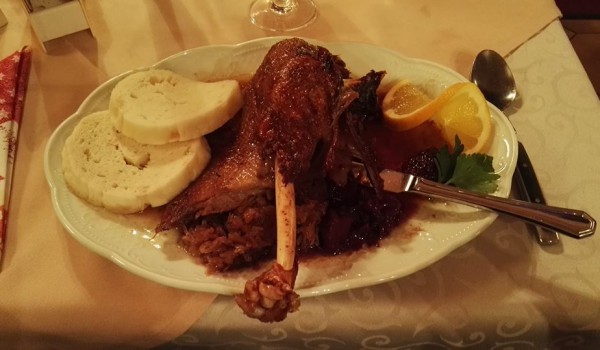 Normally a Martinigansl in the middle of December is something unheard of. OK, Schönbrunner Stöckl calls it a „Christmas goose“ these days, but in essence it’s exactly the same bird. For tourists, who are this restaurant’s main clientele, that does not make any difference, and for me, honestly, neither.

The waiter (who was quite obviously Slovak or Czech, like everyone in that restaurant) gave me a choice of a “Schönbrunner” or a “Böhmischer” version of the goose. The difference, I learnt, was in the dumpling. The former includes a standard Austrian bread dumpling with chestnuts, and the latter promises a “Böhmischer,” i.e. Bohemian, dumpling. Out of curiosity, I went for the second one and can now confidently inform the readers that Bohemian dumplings are nothing else but white bread with the crust removed. So now you can impress your guests with this fascinating local dish.

The rest of the goose was much better; surprisingly good in fact, given the time and the location. The leg I got had plenty of tender meat, easy to find and detach, and the two types of cabbage were quite interesting. One was the red cabbage mixed with apples (and I think some chestnuts), and the other was a brownish “Bavarian” type, but crunchy and with no sour taste, which usually makes me avoid it. The cranberry and the orange slices were not forgotten either, and the combination of the different tastes worked very well, almost compensating for the lack of any special sauce.

My main criticism – which has cost this goose one rating point – is about the skin, which was not crunchy at all and thus could not hide the fact that there were at least two millimeters of pure fat under it. I have nothing against fat geese (the opposite is significantly worse), but a lot of fat combined with a wobbly skin does give an impression of eating something rather unhealthy. Still, for a tourist-oriented offering, the goose was unexpectedly good and nearly (though not quite) worth its above-average price.