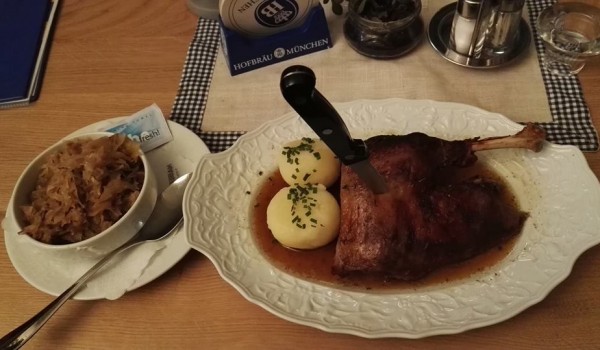 Most Austrian restaurants stops serving goose after the second week of November. A handful continue for one more week. A restaurant that still has goose on the menu on the 6th of December is a huge exception, oriented towards the tourists who know nothing about the Martinigansl tradition and idiots like me who go for anything big and white with wings without even trying to analyze past experiences.

And the past experiences should have advised me that late geese are rarely, if ever, good. The cook actually tried to send me a warning signal when serving the goose with an extra-sharp knife stuck in it and an alcohol-soaked napkin on the plate. The message was: “The meat is going to be tough. Try to use the knife to cut it, but when even that fails, use your hands.” The sad thing is, I should have listened, because the message was entirely correct.

This was one of toughest, smallest, most boring goose legs I have ever tried. The only substantial amount of meat it had was the meat on the bone, but that was just sufficient to appreciate the lack of taste. The only taste came from the sauce, which was the best part of the dish, having a flavor somehow resembling a goose. The potato dumpling was tasteless but at least did not feel like a stress-relieving rubber ball. The “Bavarian cabbage,” on the other hand, which I took as a diversion from the standard red cabbage, turned out a bad choice. Being a mixture of cabbage, onions, apples and pork lard, it had a very unappetizing brown color and totally lacked any crunchiness.

Well, all that was expected, so I can only blame myself. The Hofbräu is a relatively new, very tourist-oriented restaurant, serving rather poor Bavarian beers, but having a rather good choice of Austrian wines. It is not cozy to any extent, and its Wi-Fi is hardly working, but it may still be an acceptable location for a glass of wine on a Sunday evening or a cold beer in its garden in summer.